A Paris climate deal must not curb maritime carbon as this might damage the world economy, argues head of International Maritime Organization 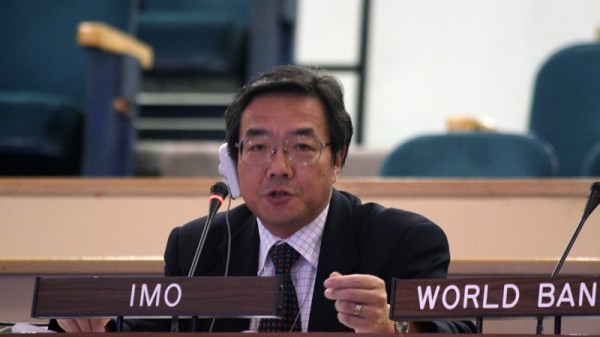 Climate action should not be cause for curbing demand for seaborne transport, according to the UN’s maritime chief.

Koji Sekimizu argued against capping greenhouse gas emissions for the sector in a statement on Monday, citing economic considerations.

Defending the International Maritime Organization’s record on environmental regulations, he said it was “the only place” to debate shipping and climate change.

His stance reflects industry fears a global climate deal set to be signed in Paris this December could demand stronger action from the IMO.

“In the process leading up to the Paris meeting, world leaders might be tempted to consider specific measures aimed at reducing shipping’s overall contribution of CO2 emissions, such as an overall cap,” said Sekimizu.

“Such measures would artificially limit the ability of shipping to meet the demand created by the world economy, or would unbalance the level playing field that the shipping industry needs for efficient operation, and therefore must be avoided.”

Shipping emissions will rise 50-250% by 2050 under business as usual, research commissioned by the IMO shows.

From 2-3% of global emissions, shipping’s share could rise as high as 14%, as national governments crack down on carbon within their borders.

The IMO has set energy efficiency design standards for new ships and is incrementally working towards potential regulations on existing ships.

A plea by Marshall Islands foreign minister Tony de Brum in May to consider an overarching emissions target fell on deaf ears.

Sekimizu said: “IMO regulations already in force will ensure that emissions per ship will be significantly reduced.

“But what they cannot do, and what shipping cannot do, is control the total, global demand for cargo to be carried. This is directly related to growth in the global economy.”

Comment: Why a Paris climate deal must cover aviation and shipping

The Clean Shipping Coalition, an alliance of NGOs, disputed that conclusion.

“Mr Sekimizu illustrates very well in his statement why the IMO has so far failed to grasp the nettle over ship GHG emissions and why its future role must be very carefully guided by an agreement in Paris,” said John Maggs, president of the coalition.

“His insistence that shipping and its emissions will grow with world trade and that emission reductions are only possible at a ship level, echo the views of a complacent industry.”

Left to its own devices, the IMO will be “unable to show the tough love that the industry needs if it is to prepare for the future and play a proper role in tackling climate change,” he added. “The need for Paris to act is greater than ever.”

UK scientists say curbs need to be “significantly more stringent” for the sector to pull its weight towards international climate goals.

Efficiency must double by 2030, researchers say, in line with a globally agreed target to hold warming to 2C.

In fact, the New Climate Economy argued in a report this month the sector offers some of the most cost-effective opportunities to cut emissions.

The reason ship owners haven’t acted to improve fuel efficiency, despite the potential cost savings, comes down to two market failures, it found.

One problem is that the company chartering a ship to transport goods often pays some or all of the fuel costs, but has no control over the design. The ship owner, meanwhile, has little incentive to invest in efficiency improvements.

Another is that there is little reliable data on the effectiveness of clean technology.

These obstacles are “neither novel nor insurmountable,” the report said, urging the IMO to improve transparency and adopt a target in line with 2C.