Why a Paris climate deal must cover aviation and shipping

If the aviation sector can fly Paris to Tokyo in three hours, it can – and must – go green, says Transport & Environment 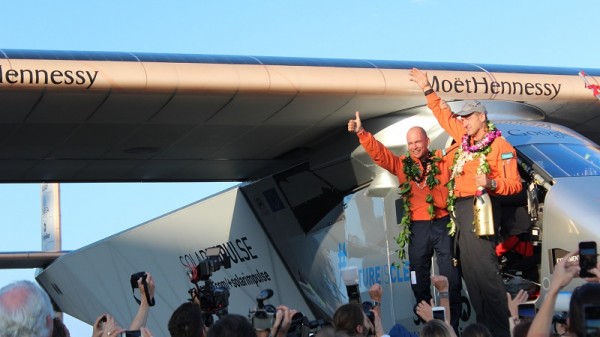 Airbus has patented a plane that can fly from Paris to Tokyo in under 3 hours.

Solar Impulse, a plane fuelled only by the sun’s rays, last month crossed the Pacific in a record-breaking journey – although the last leg of its round-the-world trip had to be postponed due to technical problems.

These breakthroughs show that 100 years after the Wright Brothers, the aviation industry can still ignite our imagination with new ideas. It’s essential that this deep commitment to innovation is fully targeted at cleaning up of air travel.

The aviation sector is already responsible for greenhouse gas emissions the size of Germany’s, with the amount set to roughly triple by 2050.

Shipping is on a similar path – it accounts for almost 3% of global emissions and those emissions are projected to grow between 50% and 250% by 2050.

As the rest of the economy slowly but steadily decouples growth from carbon emissions, these sectors are consuming an ever larger share of the global carbon budget.

With their projected growth rates, international aviation and shipping could account for a quarter of the allowable emissions to hold warming to 2C – the international goal.

That would place an extra burden on other sectors of the economy, or more likely, fatally undermine our hopes of keeping a temperature increase under 2C. (Let alone the tighter 1.5C goal demanded by countries most vulnerable to warming impacts.)

With such stark facts (and their proven capacity to innovate), you would think that international aviation and shipping would be front and centre in the discussions leading up to the Paris COP.

After all, there is broad agreement that emissions reductions need to take place in all sectors of the economy and in all countries.

Unmistakably, these two global sectors (as big as the 6th and 7th most carbon polluting countries in the world) are the two elephants in the room at Paris. 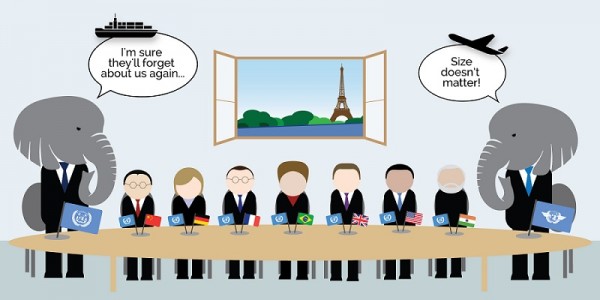 And the aviation industry is working hard to pass unnoticed in Paris.

Tony Tyler, the head of the industry association IATA, made a plea at the recent Paris air show for the aviation sector to be left out of the Paris climate agreement.

His argument was that addressing emissions from aviation should be left to the UN agencies that regulates it – the International Civil Aviation Organization (ICAO).

The shipping lobby makes the same case for keeping its emissions under the remit of the International Maritime Organization (IMO).

Given the track record that these organisations have on climate – decades of procrastination – this would be an incredible mistake.

Only this May, the IMO’s Marine Environmental Protection Committee (MEPC) rejected a call by the Marshall Islands, a nation that could be drowned due to rising sea levels, to set an emissions target for that sector.

Meanwhile, ICAO’s efforts are based on a target of carbon neutral growth from 2020 – a target that is totally insufficient for the 2C scenario, and that could be met using a questionable offsetting scheme.

The sector continues to receive generous tax-free status for its fuel, worth an estimated €60 billion a year in the EU alone, despite commitments from G20 nations to end fossil fuel subsidies.

The current wording in the Paris text that deals with international aviation and shipping sets a modest goal – that ICAO and IMO should set emissions targets that reflect the shared goal of limiting a temperature increase to 2C.

It still leaves ICAO and IMO with responsibility to identify what this target would be and what measures should be adopted to achieve it, but requires both organisations to step up their climate efforts.

Despite this modest objective, the text has sparked furious opposition since it was introduced by EU negotiators earlier this year. It is unclear if it will even survive until the opening of the Paris COP.

The aviation and shipping industries have an incredible ability to innovate, but we must make sure this innovation is targeted at creating a low-emissions future. Including the industry in the Paris agreement is a prerequisite to achieve this goal.