After a dramatic vote, leadership change is expected to bring more progressive stance on climate and carbon pricing 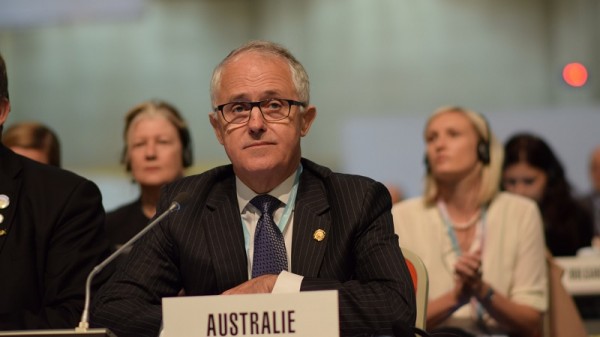 Tony Abbott was ousted as prime minister of Australia on Monday, raising the prospect of a more progressive national stance on climate change.

Liberal Party lawmakers voted 54-44 to replace him as leader by Malcolm Turnbull. The two have previously clashed over climate policy.

Turnbull, who previously led the party in opposition, will need to negotiate with coalition partners the National Party before he can officially assume the premiership.

But in previous interviews and blogs, he has described Abbott’s climate strategy as “bullshit” and made a conservative case for tackling greenhouse gas emissions.

Richard Denniss, chief economist at think-tank the Australia Institute, told RTCC: “It’s great news. There is no political leader in Australia who is less interested in tackling climate change than Tony Abbott.

“Any change of the Liberal leadership is good, not just for Australia’s climate policy but for the world’s collective attempts to tackle climate change.”

It is a reversal of what happened in December 2009, when Abbott overthrew Turnbull as leader of the Liberal Party in opposition.

The rift then was over the country’s carbon market, which Abbott pledged to scrap – a promise he carried out in 2014.

At the time, Turnbull panned his colleague for turning away from a relatively cheap way of cutting emissions.

He wrote in the Sydney Morning Herald: “It is not possible to criticise the new Coalition policy on climate change because it does not exist. Mr Abbott apparently knows what he is against, but not what he is for.”

And he still believes it — my guess is he will go into a 2016 election with a carbon price policy. https://t.co/VaSAGVfvi7

More recently, Turnbull has made a conservative case for tackling emissions.

In a TV interview last May, he aligned himself with UK Conservative prime minister David Cameron, who once pledged to lead “the greenest government ever”.

While acknowledging doubts about the accuracy of climate models, Turnbull said: “…we should take a prudent, cautious, insurance approach, and say, we should seek to restrain the growth of greenhouse gases in the atmosphere, insofar as we can, in order to offset that chance.”

Meanwhile, Abbott’s administration was preparing the country’s submission to the global carbon-cutting pact due to be struck in Paris this December.

Analysts branded his target “inadequate” and said he did not have the policies to back it up.

In his challenge to Abbott, Turnbull focused on economic leadership, which he said the incumbent was “not capable of providing”.

Despite a falling coal price and climate concerns, Abbott has championed new coal mines as a cornerstone of his economic strategy.

That has included a willingness to subsidise infrastructure for planned mines in Queensland’s Galilee Basin.

The Australia Institute’s Denniss said Turnbull would be unlikely to offer the same political and financial support.

“Malcolm Turnbull’s comments about the economy can be interpreted as a rebuke to Tony Abbott’s obsession with the coal industry,” he said.