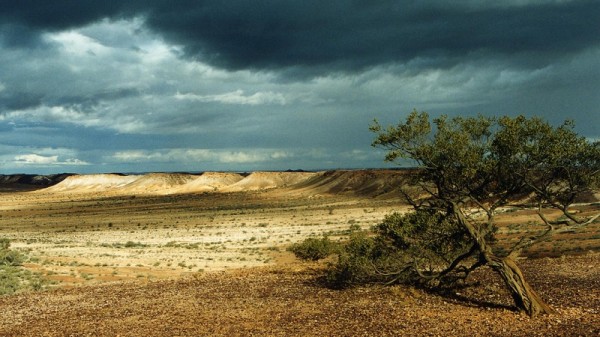 Australia will target greenhouse gas emissions cuts of 26-28% from 2005 levels by 2030, the government announced on Tuesday.

Canberra’s claims this was a “strong, credible and responsible” contribution to global climate action were met with derision at home and abroad.

“It’s very difficult to understand why a sundrenched Australia needs five years more than the United States to achieve a 26 to 28% emissions reduction.”

The package would “send a serious shudder” through the Pacific, he added, where low-lying island states like de Brum’s face an existential threat from rising sea levels.

“With this provisional target the government has shown it is willing to accept a future of growing risks and hardship for the world’s poorest communities,” said the charity’s Helen Szoke.

“This is a major blow for our Pacific neighbours, who are already paying a serious price for the failure of Australia and other rich nations to act faster, with saltwater inundation, shifting seasons and extreme weather destroying homes and livelihoods.

“Importantly, this must be understood as a provisional offer – there is still time for Australia to up its game and commit to a stronger target in Paris.”

More than 50 countries have submitted climate pledges to the UN, to underpin a global deal to be struck in Paris this December.

And grassroots campaigners across the world were furious.

Based in Manila, the movement has seen the devastation wrought by Typhoon Haiyan in 2013 and fears the consequences of more warming.

Canberra’s offer scrapes “the bottom of the barrel” said Third World Network’s Meena Raman. “Given how weak the US and European targets are to begin with this suggests the outcome of the Paris Summit will be miles away from what we need to seriously reduce the risk of catastrophic climate change.”

“In Mozambique we know that coal is the energy of the past,” she said. “Australia has a historical responsibility due to its past pollution along with other developed countries. In Mozambique we are seeing floods, droughts, and failing crops.

“The historical polluters like Australia must support the developing world to get community based renewable energy so we don’t further decimate our precious land.” 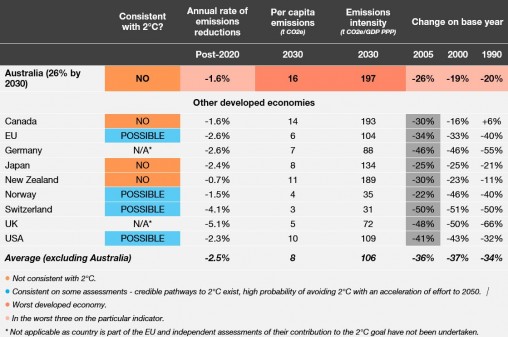 (Analysis from The Climate Institute)

Sydney-based think tank The Climate Institute said the target was out of line with the international goal to limit warming to 2C above pre-industrial levels.

If all countries took a similar approach, analysts said the world was facing 3-4C temperature rise.

For Australia, that would mean “many more unmanageable bushfires, storms and heatwaves, irreversibly damaged coral reefs, and the ability of our farmers to feed the nation stretched to its limits,” said CEO John Connor.

It would leave the country with the most carbon-intensive economy in the developed world in 2030, which Connor argued was bad for international competitiveness.

David Waskow, international climate director at the World Resources Institute, said Australia was “falling further behind its peers” with its “unfortunate stance” on climate change.

“Australia’s discouraging 2030 climate target is at odds with the severe risks the country faces from climate impacts, such as droughts and wildfires,” he said.

“The proposal stands in contrast with the more credible commitments made by the European Union, the United States and others thus far.

“If the proposal stands as-is, other countries will have to pick up Australia’s slack to tackle climate change – including many developing countries with fewer resources.”

RepuTex analyst Hugh Grossman agreed the target was “very weak” but added it would be hard to meet due to a lack of low carbon policy.

The research firm forecasts emissions growth of 12% in the next ten years due to deforestation, LNG and coal exports.

“The government has a significant policy gap to fill in terms of how it will address forecast emissions growth,” said Grossman.