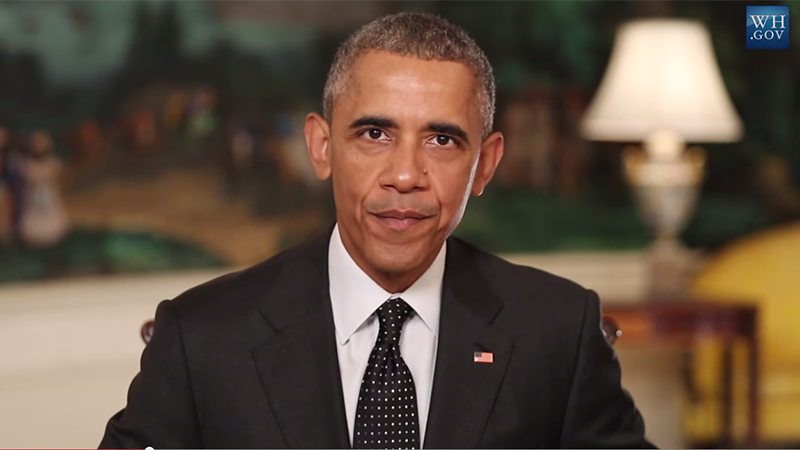 President Barack Obama in a still from an Aug 13. video outlining his trip to Anchorage (credit: White House/youtube)

Barack Obama will close a major US-devised summit on Monday to raise awareness of the melting Arctic as part of a renewed diplomacy mission on climate change.

The president will address senior officials from China, Russia and EU, scientists and NGOs at the two-day GLACIER event at a convention centre in Anchorage, according to a senior State Department official on Friday.

Hosted by secretary of state John Kerry, 450 delegates from 20 countries will address the shifting challenges of the region, as it warms twice as fast as the globe and retreating sea ice opens up new shipping routes.

Obama’s intervention will come on the day envoys from almost 200 countries reconvene in Bonn for interim talks on a global warming agreement to be adopted in December in France.

A joint declaration by stakeholders on climate will “add momentum and the Arctic countries’ voice to efforts that will be accomplished in Paris,” the US official told reporters.

“It’s obviously a very significant event for Alaska, and also for the world. Whenever the US gets involved in a project… usually action occurs.”

The Democrat leader unveiled his centre-piece climate regulation this month, which cuts greenhouse gas emissions from the power sector 32% by 2025.

“The timing is very deliberate. Paris is right around the corner and we are not on track to curb global emissions at a level that would safely manage the risks of climate change,” Cathleen Kelly, a senior fellow at the Center for American Progress told RTCC.

In a video message earlier this month, Obama said he would use the meeting to highlight the impact global warming is already having on some US communities.

“Climate change once seemed like a problem for future generations, but for most Americans it’s already a reality – deeper droughts, longer wildfire seasons, some of our cities even flood at high tide,” he said.

“In Alaska glaciers are melting… the hunting and fishing upon which generation have depended for a way of life and their jobs are being threatened.”

But the administration has come under fire for approving oil major Shell’s request to drill in the Arctic, which environmentalists say is at odds with the climate agenda.

Arctic oil is “unburnable”, according to scientists, if the world is to limit atmospheric concentrations of CO2 and hold warming to 2C – the “guardrail” to avoid dangerous climate consequences.

The official said the administration was following a “balanced approach” in the Arctic, mindful of the need to develop the resource-rich state, but also shift it toward renewable energy as the US reduces emissions.

“People are upset the President has gone too far in terms of opening up the Arctic. For an equal number of people it hasn’t been opened enough, and I’m not talking about oil companies but the citizens of Alaska,” he added.

The meeting also serves to draw attention to the US’ two-year chairmanship of the Arctic Council, an intergovernmental forum of eight countries, which it assumed in May.

With the next meet not scheduled until April, the ad-hoc event gives room for Kerry to follow through his agenda, which he will likely cede in 2016’s presidential election.

Obama will become the first sitting president to visit the Arctic Circle during his three-day visit.

GLACIER stands for Global Leadership in the Arctic: Cooperation, Innovation, Engagement and Resilience.