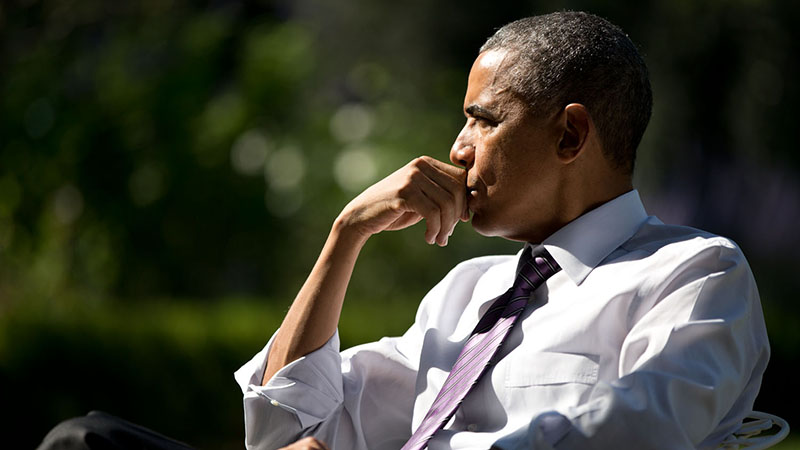 As UN talks in Paris loom, the White House is driving a major diplomatic push to boost chances of an international agreement in December.

Almost 200 nations are expected to sign a carbon-cutting pact which has eluded negotiators for over two decades.

The Obama administration has thrown its weight behind a robust – if not legally binding – outcome, putting climate at the forefront of its message.

It marks a rupture with the Bush era and its refusal to adopt binding emissions cuts under the Kyoto treaty that Paris will supersede.

The flagship policy from the world’s second largest carbon polluter landed just over two weeks ago. The Clean Power Plan promised curbs to power plant emissions and a boost to clean energy generation.

Retweet if you believe it’s time for action on climate change. #ActOnClimate pic.twitter.com/SUQYTCvC4n

And on Tuesday, a rule to tackle methane emissions from oil and gas drilling added to the bevy of regulations the Environmental Protection Agency has set under the Clean Air Act of 1990.

Methane accounts for just 9% of American greenhouse gas emissions, but they have a powerful warming effect 84 times that of carbon dioxide over a 20-year period.

The regulations, which require companies to install technologies to limit the by-product of gas and natural gas wells, would have health benefits of $460-550 million, officials said, and cost industry $320-420m.

The EPA also has aviation emissions in its sights. In June it launched an “endangerment finding” on the most-polluting unregulated sector, on public health grounds.

This month, he will speak in Alaska to rally against a melting Arctic. Private audiences with Pope Francis and opposite number China’s Xi Jinping in September offer space to converge positions.

“I have never seen such a concerted diplomatic effort that is joined up, coordinated from the president downwards,” veteran observer of UN talks and founder of Track 0, Farhana Yamin told RTCC at the recording of a new podcast, live from Monday.

The US has committed to slash CO2 by at least 26% by 2025 from 2005 levels as its part of an international agreement to cap warming to 2C. Almost 200 nations are set to strike a deal in December.

Obama’s strategy has put the country “basically in charge of negotiations,” Yamin said.

“What we’re seeing is a president that is prioritising the climate issue,” said Jennifer Morgan of Washington DC think tank WRI.

At the Arctic meet, dubbed GLACIER (Global Leadership in the Arctic: Cooperation, Innovation, Engagement and Resilience), foreign ministers from China, India and Germany will attend.

The event is the same week as the latest round of UN talks in Bonn.

According to a State Department note, the meeting will focus on regional and international solutions to global warming, as well as boost global awareness of Arctic melt.

Obama has taken hits from Donald Trump over the looming decision to build the Keystone XL oil pipeline, and from within his party on the administration’s approval of Shell high risk Arctic drilling venture.

These fossil fuel ventures are at odds with his climate agenda, environmentalists say.

“I think the very great difficulties that Shell encountered the last time they tried to do that should be a red flag for anybody,” she told reporters at an event in Nevada.