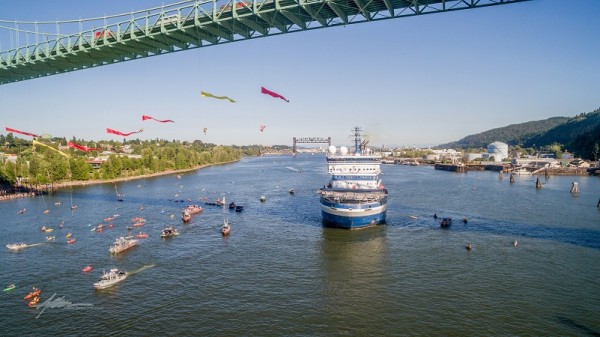 Shell has started drilling for oil in the Arctic, three years after a failed bid in the region.

The oil major, which has already spent US$7 billion on the venture, will sink test wells in Alaska’s Chukchi Sea to see if it is commercially viable.

After several setbacks, including a Greenpeace blockade detaining its icebreaker Fennica in Portland, Shell claimed to be ready to explore for oil safely.

Chief executive Ben van Beurden admitted in an interview with the BBC the project “comes with an increased risk profile” but said that was manageable.

Report: Arctic oil is ‘unburnable’ in a 2C world

Scientists at UCL have calculated around a third of known oil reserves must stay in the ground to hold global warming to the internationally agreed 2C limit.

Paul Ekins, launching that research, said it should put the most expensive projects off-limits.

“From an economic point of view, it would be unwise to extract the oil from the Arctic,” he said. “It would mean less expensive oil elsewhere was left unused.”

“I would always go for hydrocarbons which have less cost and effort involved,” he told the BBC.

“Some companies will genuinely believe – they may be right – that they can produce oil safely and environmentally securely in extraordinary conditions.

“[But] I’ve never been a great supporter of right-on-the-margin development, partly because of the cost.

“So I think you’ve got to be careful what you do and cost includes your long-term reputation.”

In a long-running campaign, Greenpeace has also raised concerns about the impact an oil spill would have on the region’s fragile ecosystems.

Activists in kayaks and hanging from a bridge in Portland forced the Fennica to return to port on 30 July, in a 40-hour blockade.

They let the icebreaker, which had been in dock for essential repairs, pass after a court threatened Greenpeace with escalating fines.

Charlie Kronick, senior climate advisor at Greenpeace, said the company’s “catastrophic record” showed it was unprepared for the harsh conditions of the Arctic. He called for regulators and investors to step in.