Forestry giant is retiring 7,000 hectares of plantations to conserve carbon-rich peat, a major source of emissions 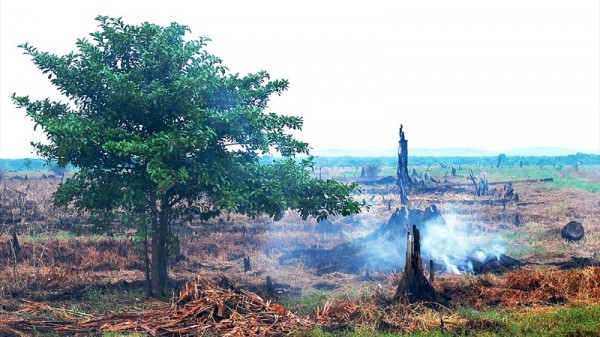 When wet, the partially decayed vegetation stores vast quantities of carbon. When dried out for forestry or farming, it decomposes, releasing greenhouse gases.

And when it catches fire, due to deliberate land clearance or tinder-dry conditions, the pollution haze causes health – and diplomatic – problems across the region.

Asia Pulp & Paper is launching a peatland conservation project it hopes could become a model for businesses in the country and worldwide.

The forestry giant is retiring 7,000 hectares of commercial plantations on peatland – an area the size of 10,000 football pitches.

It is a tiny fraction of the company’s 2.6 million hectares of Indonesian land holdings, around half of which is on peat. But forest campaigners welcomed it as a positive first step to address APP’s destructive legacy.

And it means leaving wood unharvested that would be worth an estimated US$50 million sold as pulp.

Aida Greenbury, sustainability chief at APP, said the company saw this as an investment, not a loss.

“If we don’t do this, the landscape might not be healthy for the long term,” she told RTCC. “If the landscape isn’t healthy, not only the environment will suffer but also our investment.”

Once a prime target for environmentalists over its destructive business practices, APP in 2013 promised to turn things around.

The company invited Greenpeace and the Forest Trust to help it develop a greener policy – and the Rainforest Alliance to audit the results.

Preserving peat was a core part of that, but according to Greenbury the company was held back by a lack of data.

It commissioned Dutch sustainability experts Deltares to study the area using Lidar, a mapping technology, and identify the priorities for conservation.

This “pioneering approach”, claimed the consultancy’s Aljosja Hooijer, “will advance the science of peat and peat management not only in Indonesia, but also globally”.

Bustar Maitar, head of Greenpeace’s forest campaign in the region, welcomed the initiative, urging others to follow.

“What APP is doing now is something that has never happened before,” he said.

“APP is only one player. We would like to encourage other companies who are operating in peatland to take the same approach.”

Lafcalio Cortesi, Asia director at the Rainforest Action Network, was more muted in his praise for the company.

He noted the small scale of the peat restoration projects and slow progress of forest protection measures on the ground.

“Although this is an encouraging step, it by no means shows that APP has transformed,” he told RTCC. “This announcement can’t be divorced from the company’s performance on the broader set of promises they have made.”

The Rainforest Alliance audit found that, while APP had stopped cutting down natural forest itself, it had not resolved hundreds of social conflicts or halted illegal logging by third parties.

Indonesia is expected to submit its contribution to a UN climate deal in mid-September. Together with other national pledges, it will underpin efforts to reach a global pact in Paris at the end of the year.

Jakarta’s existing policy, formulated around the 2009 Copenhagen climate summit, is to cut emissions 26% from business as usual by 2020. With international support, it said that could increase to 41%.

Analysis by the country’s climate change council at the time identified peat and land use as the most important sectors to target.

It projected emissions from peat to reach nearly 1,000 megatonnes of CO2 equivalent a year by 2030 under business as usual.

Preventing fires and restoring degraded peat could stop more than half of those emissions, the study found, with measures costing up to US$5/t.

The government should stop issuing licences for peatland and start to “retreat from peat”, said RAN’s Cortesi.