Can the world’s biggest pulp and paper firm quit destroying rainforest and what difference does it make to the climate? 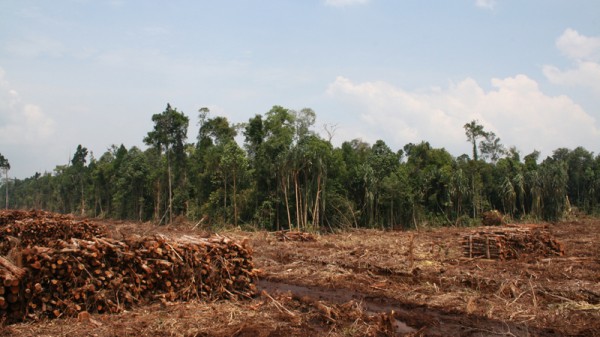 It is the biggest forestry, pulp and paper business in the world, responsible for an area of forest the size of Belgium.

And from being a notorious destroyer of Indonesia’s tropical forest, home to orang-utans and the endangered Sumatran tiger, Asia Pulp and Paper promised in 2013 to clean up its act.

The company gave an unprecedented degree of access to NGOs to check its progress. Greenpeace and the Forest Trust helped APP develop its forest protection policy and the Rainforest Alliance carried out an independent audit, published this month.

“This is the first time anyone has done a completely publicly transparent, independent evaluation,” Richard Donovan, who led the audit, told RTCC.

“It is a pretty big deal, not only for the pulp and paper sector but also for anyone making commitments on deforestation.”

For Indonesia, where global demand for palm oil and paper are driving large scale forest clearances, it is the main source of emissions.

In 2010, peat degradation and deforestation released a trillion tonnes of carbon dioxide equivalent, Indonesia’s National Council on Climate Change found. That is equivalent to Germany’s total emissions from all sectors.

Last September, 27 national governments and 34 companies – including APP – signed a pledge to halve natural forest loss by 2020 and end it in 2030.

APP’s experiment is critical not only to cut its own emissions, but to show others that sustainable forestry is possible.

When Rainforest Alliance presented its findings in Jakarta earlier this month, it was to a packed room.

APP had stopped cutting down natural forest to create plantations on its 38 concessions, the NGO revealed.

It also stopped cutting drainage canals in peatland, a practice that causes peat to dry out and decompose, releasing greenhouse gases.

What it had not done, by the time Rainforest Alliance completed its field studies last August, was stop forest clearance and illegal logging by others.

Nor had it resolved hundreds of social conflicts with communities affected by its activities, including indigenous peoples.

“We were not surprised when the report came back not very rosy,” said Aida Greenbury, chief sustainability officer at APP.

“If the report came back very rosy and beautiful, we would know the Rainforest Alliance did not do their work properly.”

APP wanted the auditors to point out their shortcomings, she said, in order to address them.

The company has not always been so open to criticism. Indeed, Rainforest Alliance stopped working with APP in 2007 after two biodiversity audits showed they had made “insufficient” efforts to improve.

It took some emotive campaigning against APP and its sister companies in the Sinar Mas group to spur them into action.

One particularly brutal Greenpeace advert in 2010 showed an office worker opening a KitKat, only to find an orang-utan’s finger inside. It urged Nestle to stop buying palm oil from areas of destroyed rainforest.

“For us, it was very hard to understand, because we thought we were very right in what we were trying to do,” said Greenbury.

Indonesia is a developing country and APP saw itself as a force for good, bringing jobs and economic benefits.

“It was hard for us to understand the NGOs’ language. But we also recognised something was wrong.”

The Forest Trust acted as a mediator, translating the demands of the green groups into business policies.

As a commercial enterprise, APP also wanted to make sure these constraints would not hit its profits.

The first act was to halt all developments while experts assessed which forests were important to save. Its commitment was to preserve mature, “high carbon value” forest and only plant on degraded or scrub land.

“All our work on the ground stopped,” said Greenbury. “That was really hard, telling hundreds of our contractors to drop their chainsaws and everything else and wait until these assessments were completed.

“In this part of the world, trying to explain what high conservation value and high carbon stocks are is not an easy thing to do.”

Harder still was cracking down on illegal logging on APP’s concessions and resolving competing claims on the land.

APP promised to respect the customary land rights of indigenous peoples in proposing new developments, and only go ahead with their “free, prior and informed consent”.

Donovan and his team found “limited progress” on this front. Out of several hundred social conflicts, only one had been resolved by August 2014.

Greenbury blamed the government for awarding licences to companies without regard for the tenure of indigenous groups.

“Once the licence is given, the government basically washes its hands of it,” she said. “We are trying to address that legacy.”

While APP has some way to go on meeting its policy commitments, its efforts have been enough to win some customers back, including US stationery chain Staples.

And it has convinced at least some green campaigners of its sincerity, achieving the rare feat for a business of getting Greenpeace onside.

Greenpeace has shifted its campaign focus to APP’s lead competitor in Indonesia, Asia Pacific Resources International Limited (April), which is still understood to be cutting down natural forest.

Phil Aikman, the company’s contact in Greenpeace, told RTCC he had met members of the family that owns the Sinar Mas Group several times.

“The family builds relationships based on trust,” said Aikman. “While we [Greenpeace] caused them a lot of economic pain, because of causing customers to cancel contracts with them… we have worked quite cooperatively together over the past few years.”

That extends to sharing confidential information with the green campaigners and commissioning other audits that have not been published, he added, to address their concerns.

Donovan suggested a follow-up audit in early 2016 would give APP a chance to show more progress. Nothing has yet been agreed.

It is in the interest of Indonesians to get this right, he argued: “If there is not a good balance struck between development and conservation, there are not going to be sustainable livelihoods for the community.”