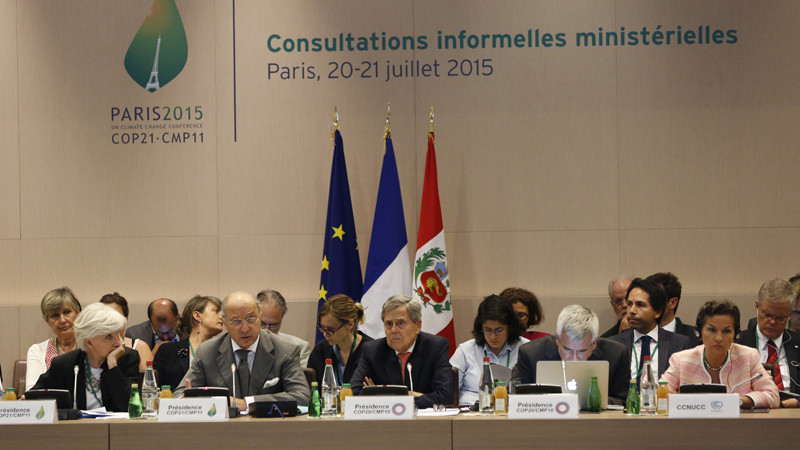 A forum of the world’s advanced economies could seal the fate of a UN climate pact to be struck in Paris weeks later, say French officials undertaking a frantic diplomacy blitz.

A Group of 20 meeting in Antalya, Turkey, this November is the moment for rich nations to state how they will mobilise $100 billion a year from 2020 to help poor countries fight climate change.

“If developed countries have to honour their commitment, then it is important to clarify the modalities,” France’s special envoy for the protection of the planet, Nicolas Hulot, said on Monday.

“All these issues will be discussed at G20 meeting… They will have to find out new sources of financing (ahead of the Paris summit),” he said in remarks reported by the Times of India.

Finance was the “most difficult [part of the agreement],” said Laurence Tubiana, France’s top climate emissary, making reference to the slow progress of a draft climate deal.

The remarks crank up the pressure on rich nations to stump up cash agreed in Copenhagen in 2009.

That money is critical to a global warming agreement, with climate plans from the likes of Morocco and Kenya predicated on cash and technology to deploy clean energy projects and adapt to a warming planet.

Kenya said it will require $40bn over the next 15 years in its plan to slash CO2 emissions by 30%, of which an undisclosed portion is hinged on international support.

China even demanded evidence of $40bn by the end of 2014, which was dismissed by an EU negotiator at the time as “not realistic”.

UN estimated that amount was already flowing from developed to developing nations, however, counting $40-175bn a year of finance over 2010-12. Money from public institutions totalled $35-50bn, while $5-125bn came from private sources.

Some $10bn has been pledged to the UN-backed Green Climate Fund, which is set to approve its first projects by December.

Poor countries want hard evidence of new funds, not just development aid rebranded. The G7 “reaffirmed” their commitment to the $100bn total in June, but concrete examples are key.

“It’s important to explain where the finance will come from to avoid poisoning or hijacking the agenda. There is a need for solidarity to be reflected,” said Teresa Ribera, head of Paris-based think tank IDDRI, which is close to the French presidency chairing UN talks.

“What’s clear is there is no common plan amongst developed countries,” Oscar Reyes, at the Washington-based Institute for Policy Studies said.

“For countries not to come up with the $100 billion, which is a lot lower than other estimates, would yield a serious loss of trust. It would make a Paris deal harder.”

In recognition of this, French officials are accruing air miles by meeting counterparts worldwide. A ministerial to exclusively tackle the climate finance issue is scheduled for September. Talks are ongoing in Peru as well.

Nick Mabey, chief executive at London think tank E3G, said he didn’t expect clarification on the $100bn’s funders by the G20, but during the Paris summit.

The issue would form part of a “broader package” of discussion on a long-term decarbonisation goal, transparency, and the legally-binding nature of the agreement needing to be pulled together.

“I don’t think there’s a massive following of the German position of upfronting public finance commitments,” he told RTCC. “It won’t be a cliff-edge moment.”

Mabey downplayed rhetoric from developing countries like China as “part of the choreography of talks”.

The G20 comprises the world’s largest developed and emerging economies, responsible for 70% of global CO2 emissions, two-thirds of the world’s population and 85% of world GDP.

Leaders will meet for two days in Turkey on November 15-16, with the Paris summit starting on November 30.