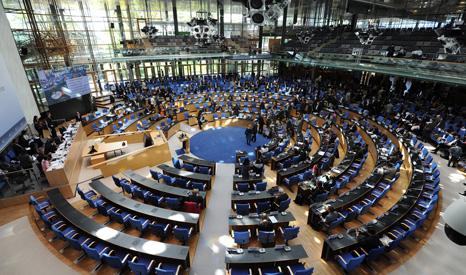 By Sophie Yeo and Ed King

Levels of trust between leading developing countries and the USA and EU member states appears to have hit a new low after a week of UN climate talks in Bonn.

India, China and 24 other countries in the Like-Minded Developing Countries (LDMC) group say the brunt of greenhouse gas cuts must be made by industrialised countries.

The US, EU and Switzerland say the global climate deal scheduled to be agreed in Paris next year will only work if all countries make commitments, which they say was agreed in 2011 in Durban.

A lack of progress means envoys face a tough task to get a draft agreement ready for a high-level climate summit at the end of 2014, according to Alden Meyer from the US-based Union of Concerned Scientists.

“At the next negotiating session in June, countries will need to come prepared to put forward more details on their visions for the Paris climate agreement, and then work to narrow their differences,” he said. “Otherwise, it will be difficult to produce a draft negotiating text for discussion at the climate summit in Lima this December.”

The five-day meeting in Bonn was intended to work out certain parameters for how the 2015 deal could work, but swiftly descended into fierce exchanges between delegates.

Switzerland’s Ambassador for the Environment Franz Perrez told RTCC “dogmatic views such as all Annexe 2 have to pay, and it’s only them to have to pay” are preventing the talks from progressing.

He said climate vulnerable countries such as the Philippines should disassociate themselves with the LDMC group, which he accused of trying to slow the talks.

Perrez said: “I do not understand, if you look at what the position of the Philippines should be, they should not defend the interest of China, of India, of Singapore, of Saudi Arabia and Venezuela, so it’s surprising how they are arguing in favour of maintaining a regime that is not in their advantage.”

He added: “The NGOs love the Philippines because they speak great, but their position is the same like the Saudis.”

The delivery of extra flows of finance – long the subject of bitter exchanged between countries – is likely to depend on when the UN-backed Green Climate Fund comes online.

A GCF board meeting is scheduled for May, but RTCC understands there are growing concerns that it may not be ready in time, which would likely delay any new announcements of funding.

Ahead of the Bonn meeting China called for developed nations to raise their 2020 emission reduction commitments to 40%, and deliver $40 billion of climate finance by the end of the year.

These demands were described as “not realistic” by one EU negotiator, but Su Wei and Zou Ji, China’s delegates at the meeting, said poorer nations cannot deliver the emission cuts required unless they receive more help.

Most developed countries think the Paris agreement should include some reference to finance, but should focus on cutting emissions of heat-trapping gases and means of measure and verify progress.

Developing countries say the 2015 deal must include specific commitments on funding, technology transfer and adaptation requirements, as well as loss and damage.

“It was concerning that rich industrialised nations continued to push a very narrow barrow here… it is obvious that people need a much more holistic approach if we are to keep people and our food systems safe,” said  ActionAid’s Harjeet Singh.

The next round of talks in June will mark the start of what are being called ‘formal negotiations’, after countries agreed to move away from a more collegiate set of discussions.

“The next nine months will require all nations to raise their eyes beyond business-as-usual in order to counter the threats and deliver the multiple opportunities from moving rapidly towards a cleaner, healthier, low carbon world,” she said.

Others were more blunt.

The UN’s Ambassador to the Marshall Islands Amatlain Kabua said bickering between leading nations had to stop for her country to have a future.

“The US and China should see that they’re the worst bad boys around, and everyone knows that, so they should try to make amends,” she said.

“The big countries have a bigger role because they have the means, they have the resources. In the Marshall Islands, we have only fish to trade with.”