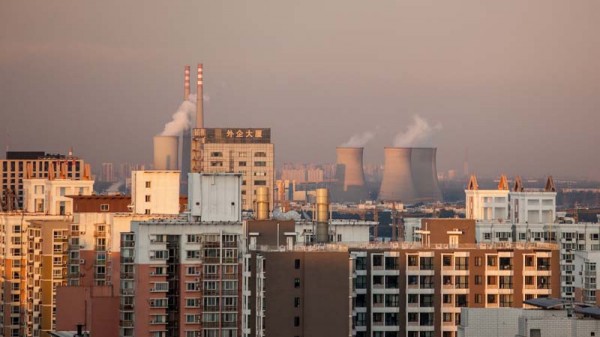 China needs to clean up its heavy industry to get on a safe climate path, say scientists (Pic: Flickr/Jens Schott Knudsen)

China has big plans for clean energy and is aiming to peak greenhouse gas emissions in 2030.

Climate Action Tracker, a coalition of four leading research bodies, gives it a “medium” grade for most of its national climate policies. That is on a par with the US and EU.

But on one critical measure – carbon intensity – the world’s biggest emitter is aiming too low, the analysts warn. Beijing has pledged to reduce the carbon emitted for each yuan of GDP 60-65% below 2005 levels by 2030.

That figure is “inadequate”, said Hanna Fekete of New Climate Institute. “The difference between China’s carbon intensity goal and its national actions and goals is disappointing.”

Taken in isolation, China’s carbon intensity target would result in 2030 emissions of 15-16.9 gigatonnes CO2 equivalent, scientists calculate. The other policies imply a lower figure of 13.6 Gt.

Governments have agreed to try and limit global warming to 2C above pre-industrial levels. They are submitting national plans to the UN that will underpin a global deal in Paris this December.

Yet the policies announced by big emitters to date fall short, setting a course for dangerous weather extremes and sea level rise.

By Climate Action Tracker’s reckoning, only three countries are doing their fair share towards the 2C goal: Bhutan, Costa Rica and Morocco.

If everyone matched China’s “weak” efforts on carbon intensity, warming could exceed 3-4C, the analysts say.

Other elements of China’s submission to the UN this week were judged to be stronger. It includes a target to get 20% of energy from non-fossil fuels sources by 2030.

These include HFCs and HCFCs, a group of highly potent warming agents used in air conditioners and fridges.

“While non-CO2 emissions will continue to rise through to 2030 under current policies, it is good news that China has targeted reductions of both HFCs and HCFCs,” said Blok.

To bring the carbon intensity target, which hinges on cleaning up heavy industry, in line with the rest of the package it should be 70%.

Bill Hare of Climate Analytics called on Beijing to also consider setting targets for 2025 instead of 2030, to allow for ramping up later.

“There is plenty of room for the world’s biggest emitter to step up, remove its safety net, and bring emissions closer to a 2C pathway,” he said.