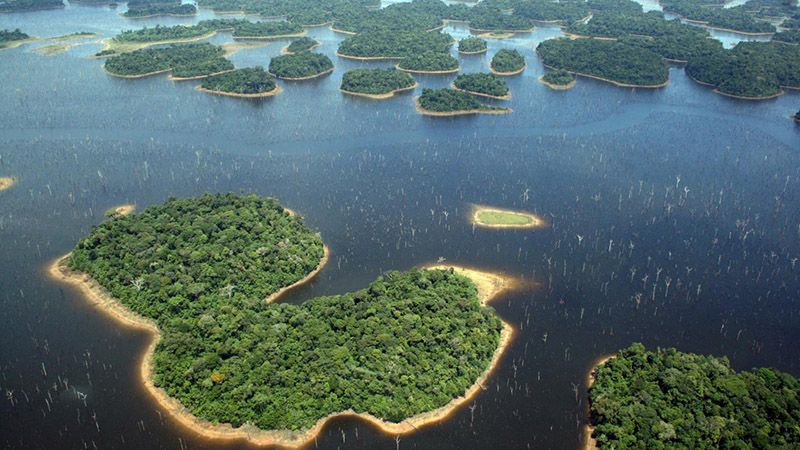 Brazil’s thirst for hydropower, which generates over three-quarters of the country’s electricity, has taken a heavy toll on the environment according to new research.

The giant walls of concrete which re-route rivers and flood swathes of land to make renewable energy have stripped forests of wildlife, a study published in Plos One journal said.

Balbina Dam in the central Brazilian Amazon created an artificial archipelago of over 3,500 islands in the 1980s.

Today, just 25 of these harbour more than four-fifths of 35 monitored species, researchers at the University of East Anglia found – an indicator of biodiversity.

Mammals, large gamebirds and tortoises disappeared from the islands, which leave less space to roam than the old unbroken forest. Losses were worst in small islands exposed to wind and wildfires in a 1997-98 drought.

Developing countries like Brazil, China and Thailand have boosted the large infrastructure projects in recent years.

Meanwhile in the US, dozens of aging dams are being blown up as the costs of upkeep outstrip the benefits, restoring rivers for fish and wildlife.

Brazil’s powerful rivers are located a long way from population centres on the south coast. As well as export the power over long distances, the generators attract heavy industry to sit next to the dam.

This has a big impact, study co-author Carlos Peres told RTCC, as workforces flock to regions “which have no inclination to industrial activity”.

And in Balbina’s case, Peres argued the power supply did not justify the environmental impact. Some 3,000 sq km was flooded to supply just 10% of the energy needs of Manaus, a jungle city of about 2 million.

Chronic droughts have affected Brazil’s hydropower generation this year, calling on natural gas to plug the gap, said Philip Fearnside, at the National Institute for Research in the Amazon. As climate impacts ramp up, hydro’s share may now be at 70% and could fall further, he added.

“The non-monetary factors don’t get weighed at all,” Fearnside said from Manaus, adding a handful of senior government figures license the projects, while environmental impact assessments aren’t available in advance. An ongoing corruption scandal has linked politicians and major dam builders, according to Amazon Watch.

The US Energy Information Administration notes Brazil plans to move away from hydropower to minimise the risks of a hotter climate, but is still going ahead with hydro projects.

Brazil’s president Dilma Rousseff announced this week plans to boost non-hydro renewables to 28-33% of its energy by 2030, as well as promising policies to eliminate illegal deforestation. It is in the process of drawing up a national climate plan to help curb global warming.

The 14,000 MW Belo Monte dam along the Xingu River, expected to be completed in 2016, will become the second-largest dam in Brazil — and the third-largest dam in the world — at a forecast cost of US$13 billion.

It has been criticised for forcing indigenous communities from their homes and hurting forest biodiversity.