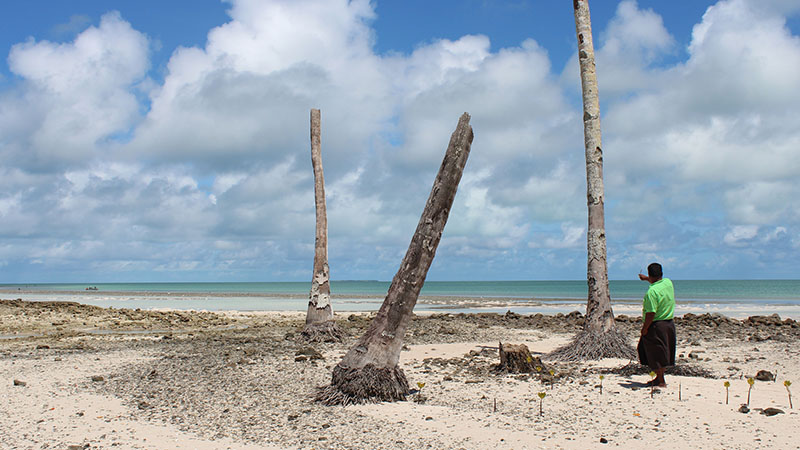 A proposed UN pact to address climate change will come too late for the population of Kiribati, the president of the tiny Pacific state told the UN General Assembly on Monday.

“No matter how ambitious it is – for us on low lying atoll islands it is already too late,” Anote Tong told an audience including UN secretary general Ban Ki-Moon and government officials.

“King tides combined with strong winds wreak havoc among our people… in some parts whole villages have had to relocate.”

Tong said the country had already embarked on a plan to evacuate some of the Kiribati’s 32 atolls, adding: “We don’t have a lot of options.”

But he urged countries to use Kiribati’s plight as inspiration to develop an ambitious deal to radically cut greenhouse gas emissions and avert further consequences from rising temperatures.

“There have been times I have almost lost hope – there’s a limit to how many times you can tell a story people are not listening to,” he said. “We cannot afford to be paralysed into inaction.”

Tong’s intervention came on a day when the world’s top emerging economies warned promises from developed nations to help fund clean energy projects were not being kept.

The BASIC group of India, China, South Africa and Brazil said a 2009 promise to deliver US$100 billion a year by 2020 to poorer countries was well off course.

“There is still a clear expectation and so I hope the developing countries can fulfill their commitment before the Paris meeting,” said China’s climate change envoy Xie Zhenhua, in quotes reported by the Guardian.

Edna Molewa, South Africa’s environment minister, said the goal to deliver $100 billion was “very far” from what was needed.

“It is important therefore that this scaling up happens… there is still a lot of money that is required.”

According to Oxfam, less than $20 billion (£13 bn) a year is flowing from developed country public funds.

Of that, only $2.5-4.5 bn is being used to help countries prepare for future extreme weather events, a level the World Bank has warned is far too low to protect those vulnerable to future impacts.

Developing countries have long stressed that a clear financial package will be central to any agreement in Paris later this year, while the French hosts have made funding one of a proposed pact’s four “pillars”.

The funds are needed to both help countries invest in cleaner forms of energy and avoid long term fossil fuel investments, and also to prepare for future floods, droughts and rising sea levels that scientists say could intensify as a result of climate change.

“I count on leaders to exercise political direction… now is when true leadership is needed from the highest level,” he said.

“Heads of state must give clear guidance to negotiators so that they take personal responsibility in Paris.”