Not enough cash is flowing to boost resilience in the face of sea level rise and weather extremes, development banks warn 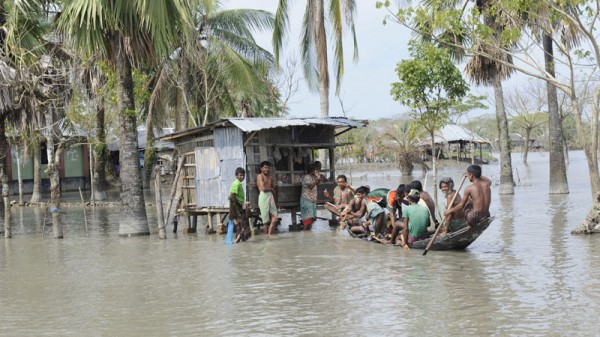 Only 18% of the US $28 billion directed towards climate finance projects by the world’s top six multilateral development banks in 2014 was focused on climate adaptation.

The rest was devoted to mitigating greenhouse gas emission, reveals the report commissioned by the World Bank along with top development banks covering Africa, Asia, Europe and South America.

Rachel Kyte, World Bank special envoy on climate change, said increasing investment in resilience was a concern for all the banks.

“Support is urgently needed now to support those who are most vulnerable,” she said in a statement sent to media.

Even if governments agree a global pact to limit warming to 2C above pre-industrial levels, the risks and impacts of climate change will increase significantly, experts found.

Crop failure, mass migrations and damage to major cities could run up a damage bill of $250-500 billion a year by 2050, said a 2014 report from the UN environment body.

It cautioned that many of the world’s poorest countries are expected to be the worst hit by future climate impacts, but lack the technology, infrastructure and in some cases skills to cope.

The solutions range from flood defences to development of drought-resistant crops.

A new UN-backed Green Climate Fund is committed to directing half of its contributions to adaptation plans, but with only $10 billion banked its immediate impact will be small.

Richard Klein, a climate adaptation specialist at the Stockholm Environment Institute, told RTCC he was confident funds to build resilience would start to accelerate.

That would depend on new finance mechanisms such as green bonds and encouraging the private sector to take more of an interest in adaptation, he said.

“The amount will be growing due to political pressure for voluntary donations, but it won’t be enough to close the gap identified in the UNEP Adaptation Gap report.”

A 2014 UN report on climate finance flows suggested 11-24% was directed towards adaptation. The Least Developed Countries Fund, Special Climate Change Fund and Adaptation Fund approved an average US $190 million per year between 2010 and 2012.

Raising levels of climate finance is one of the four “pillars” of a proposed UN climate agreement, set to be signed off in Paris later this year.

In 2010, industrialised countries vowed to deliver $100 billion a year by 2020 to help poorer states develop clean energy systems and cope with weather extremes.

Delivery on this has been slow and the sum is dwarfed by clean energy investment projections from 2015-2030 that the New Climate Economy report estimated to be in the region of $45 trillion.

Multilateral banks were planning to “stretch our balance sheets and crowd in more capital” as a result of a G7 request to focus on the low carbon economy, said Kyte.

Still, more funds will be required from public and private sources, with a UN-backed development finance meeting in Addis Abba next month expected to offer guidance on how this can be achieved.