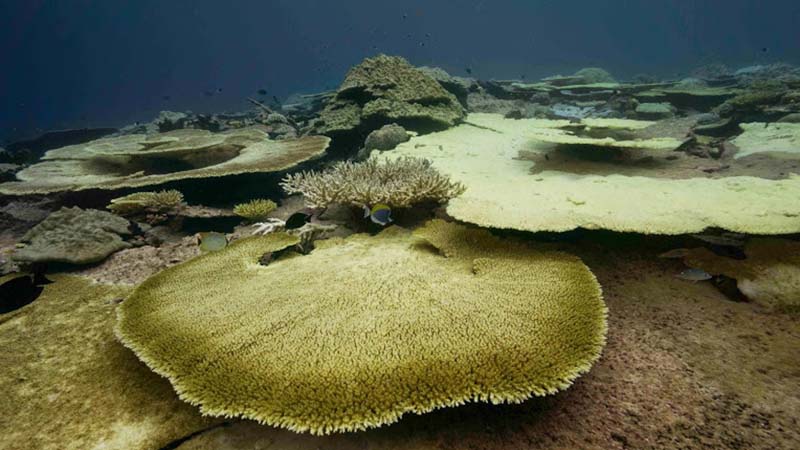 Coral bleaching is advancing across the world’s oceans after breaking a brief hiatus last year.

Researchers have discovered reefs in the Pacific and Indian oceans have whitened – and the Caribbean is expected to follow as the northern hemisphere flips to summer.

Rising sea temperatures on slowing trade winds are stressing the sensitive organisms to expel pigmented algae in their tissues.

“We’re in the midst of what is likely to be only the third time we’ve had coral bleaching as one big warming event sweeps through the world’s oceans,” Mark Eakin at the National Oceanic and Atmospheric Administration (NOAA) told RTCC.

Bleaching occurs when corals face stress due to changes in nutrients, light and temperature, but it’s only the latter that can cause widespread damage.

In 1998, the worst event on record, hotter waters through the El Nino phenomenon killed 16% of the world’s coral. In 2010, another El Nino year, saw bleaching from the Seychelles to Panama.

And with scientists predicting a moderate El Nino this year corals are braced for more trouble.

In mid-2014 doldrum-like conditions impacted reefs in Guam and the Mariana Islands in the Pacific, and have spread to the Indian Ocean this year, said Eakin, a coordinator at NOAA’s Coral Reef Watch.

On June 2 the federal agency declared “a full-fledged global bleaching event” was “likely”, though less than severe than 2010.

Report: Corals everywhere could lose their colour in 2015

Andrew Bruckner at the Living Oceans Foundation caught this firsthand.

Diving in March and April in the atolls of the British Indian Ocean Territory, observations were alarming at some reefs the institute’s chief scientist told RTCC.

“During March we saw no bleaching whatsoever, the water was basically around its seasonal maximum temperature of 29C. Though we came back nine days later and started to see coral getting pale quick,” he said.

On one dive in the Salomon Atoll, Bruckner documented corals turning a kaleidoscope of colours as they produced fluorescent pigments while bleaching as temperatures reached up to 32C at up to 35 metres depth.

“While beautiful, this wasn’t normal,” he added. 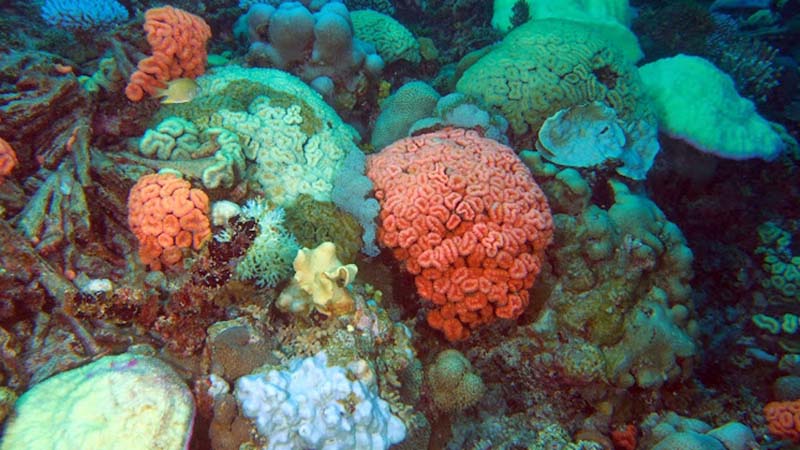 Bruckner described the corals as “coloured popcorn” as bleaching was most severe at shallower depths (credit: Living Oceans Foundation)

For now, time and research is needed to assess the true impact. Colder waters through currents in June have brought relief as temperatures subsided.

Corals can grow back after states of ‘mortality’, though frequent warming events stunt the natural replenishment of healthy reefs.

After chronic bleaching in 1998, a study showed of 21 reefs in the Maldives, just 12 grew back. Meanwhile on the Chagos archipelago where Bruckner’s team carried out surveys all had recovered by 2006, in part due to its remoteness.

“With two years of reproductive failure you’ve just effectively lost all the new baby coral that were coming through,” he said.

“Coral are the foundation of reefs which protect from storms and provide habitat. Think of tropical rainforests, coral are the equivalent to the trees.”

In Australia, the government and campaigners are tussling over plans to build a coal port that would busy shipping lanes through the Great Barrier Reef.

UNESCO may still declare the world’s largest reef as “in danger”. In Mexico, parts of the Mesoamerican reef are at risk due to port expansion in the city of Veracruz, according to environmental lawyers AIDA Americas. 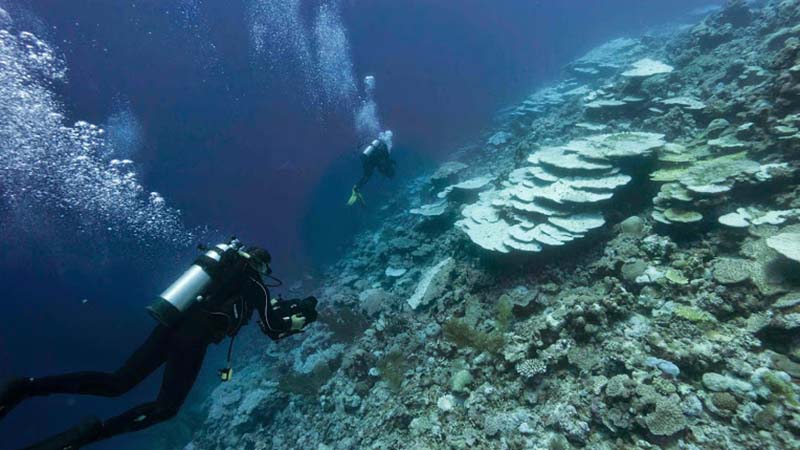 Though the onset of monsoon season is causing concern as strong currents could break frail coral.

NOAA doesn’t think this year will be as severe as 2010 due to a weaker El Nino. However some locations like the Caribbean and Hawaii may fare worse than before.

For both, the link with global warming is clear.

Scientists posit the oceans have kept a lid on global warming during the ‘pause’ of the last 15 years – they are estimated to hold about 90% of the Earth’s heat due to the atmosphere’s weak storage capacity.

Though corals have historically adapted to climbing temperatures, says Bruckner. Chagos reefs are bleaching 1c higher now than in 1998 for example, he says.

But a sudden temperature increase in a matter of weeks, rather than a prolonged  climb, can be fatal.

As almost 200 countries work to strike a global climate agreement in Paris in December to prevent dangerous climate change, the fate of corals hinging on holding down temperatures.

“Until we start to reduce the amount of CO2, corals are going to be hit like this,” Eakin said. “Paris needs to bring some real changes.”