Government has promised to deliver ambitious plan to UN, but critics say work on Paris contribution has slowed 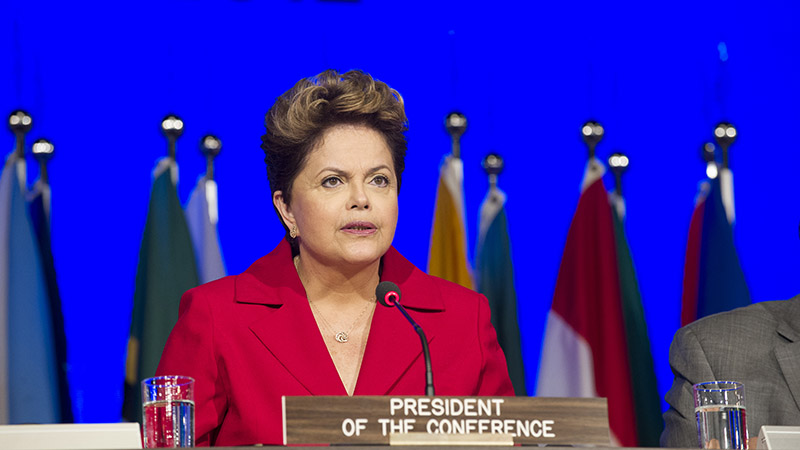 By Fabíola Ortiz in São Paulo

Brazil is no closer to revealing if and when it will announce what its contribution to a proposed UN climate deal will be.

Experts close to the country’s climate change policymakers have told RTCC there is a lack of urgency at the highest levels to deliver its intended nationally determined contribution (INDC) for Paris.

An early warning that all was not well came in March, when president Dilma Rousseff fired key officials from the sustainable development secretariat of the ministry of strategic affairs.

The team dismissed was responsible for the largest study ever done in the country on climate change adaptation called “Brazil 2040”.

This covered public policy across a number of sectors, including energy, infrastructure, agriculture and water.

It was supposed to be an important document for planning national development, offering inputs to the INDC.

Critics also point to this year’s appointment of Aldo Rebelo as science and technology minister. This is a man who is on record claiming there is “no scientific proof for global warming.”

All this while the country wilts under one of the worst droughts on record. Taps are running dry, cities are rationing water, power from hydroelectricity is in doubt.

But in the corridors of power in Brasilia, calm prevails. The authorities seem to be delaying the release of any proposals until the last minute.

RTCC understands some politicians are suggesting that Brazil should not accelerate its efforts to develop an INDC given the agreement will only start in 2020.

In public, the government is talking up its prospects.

Last month environment minister Izabella Teixeira told Bloomberg she would deliver an “ambitious” plan that would include more renewables in the energy mix.

It could also offer a tougher zero net deforestation pledge, a controversial issue in Brazil – even among environmentalists

And she stressed that the country would not be the last to offer its INDC.

Last year the foreign ministry suggested it would deliver the goals by June, but by February this year diplomats indicated that would likely slip to October.

It’s a concern for those pulling together plans for a global climate pact in Paris, set to be signed off in December.

Brazil, along with South Africa, India and China is one of the top emerging economies responsible for a recent surge in emissions on top of those being pumped out by developed countries.

In recent years this country of 200 million has lost the pace in setting national commitments to cut greenhouse emissions.

It’s a significant polluter, the biggest regionally and the seventh largest globally – 1.56 billion tons of carbon according to 2013 data.

Analysts like Carlos Rittl, executive secretary of the Climate Observatory in Brazil remain sceptical of the administration’s promises.

“Climate change is not yet a priority to the government”, he said in an interview.

The INDCs will be the bricks and mortar of any new climate change deal.

Determined by national governments, those released so far set out the greenhouse gas cuts they feel are practical, along with longer term adaptation, technology and finance requirements.

For André Nahur, climate and energy coordinator at WWF-Brazil, it’s important the contributions are released in advance so as to give enough time to evaluate every nation’s role.

“Postponing until the last moment makes the negotiation process even more difficult. The climate discussion is not being prioritized by the government,” said Nahur.

“We see clear evidence authorities are going in the opposite direction comparing to other nations.”

As one of the world’s top economies and a vocal presence at UN climate summits, the lack of progress is deafening.

And in Nahur’s opinion, there is still a distinct lack of clarity on what the Brazilian INDC will look like.

In the absence of government information, WWF has set its own benchmarks for Brazil.

It suggests a target of not emitting more than 1 billion tonnes of CO2 annually by 2030 – ideally not passing 0.6 billion tonnes.

And wants the share of non-hydro renewables to rise 33% by 2025. At the moment solar, wind and biomass account for 10%.

This, he pointed out, was already in the 2008 National Plan on Climate Change and should have been met by 2015.

“If we take this goal for granted, we would delay this target fixed eight years ago in ten or fifteen years more. This is not ambitious,” he said.

“Added to this, the environmental liabilities accounts for 24 thousand hectares, that is to say 1-2 million hectares a year should be restored along 20 years – which is the same deforestation rate Brazil registers annually.

He has little expectation that Brazil will offer any “reasonable or concrete ambition” for 2020 or beyond.

Just over five years ago Brazil – then under the presidency of Luiz Inacio Lula da Silva – assumed a voluntary commitment to reduce greenhouse gases between 36% and 39% until 2020.

This made it one of the first developing countries to take action, and as the Climate Tracker Initiative reports, it will likely meet this under its current policies.

It has been able to decrease the deforestation rates and avoid the emission of 650 million tons of gases (roughly the same as the UK emits every year).

In many senses the government has a positive story to tell, and for analysts like Rittl it’s vital it not only leads domestically but on the international stage.

“The world should expect much more of Brazil,” he said.

“It is reasonable to wish that one of the largest economy and a high emitter should announce relevant commitments so as to boost the process and the international debate.”