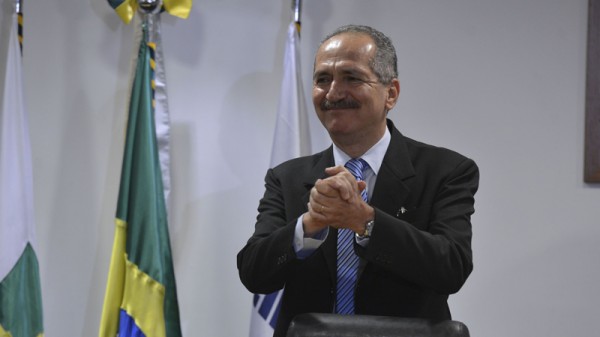 Brazilian president Dilma Rousseff, elected for a second term in October, has spoken out on climate change and delivered substantial cuts in deforestation.

When it comes to her choice of cabinet, Rousseff’s environmental credentials are less evident.

Rousseff appointed Aldo Rebelo as the minister of science, technology and innovation: a hard-line communist and congressman who was sports minister during the 2014 World Cup. He rejects the scientific consensus on climate change.

Rebelo took charge in the beginning of January. His ministry is responsible for supplying the Brazilian government with strategic data and information for the UN climate talks.

But his main association with the environment has been to advocate weaker protections, such as controversial reforms to the Forest Code.

His unpopularity among environmentalists goes back to 2010 when he released a public letter entitled “An environmental scam” describing attempts to defend nature as a farce and a fraud.

He stated that “the so-called environmentalist international movement was nothing less in its geopolitical essence than an imperialist beachhead”.

Rebelo added: “There is no scientific proof of the projections of global warming, even if it is occurring due to human action and not because of natural phenomena. It is based on computer simulations.

“I am curious to know if those who nowadays accept the theory of global warming and its alleged anthropogenic causes as unshakeable dogma are the same ones who some years ago announced with identical divine certainty global cooling”.

That personal opinion stated four years ago contradicts the position Brazil is playing on the international stage, experts told RTCC.

“He wrote a statement that explicitly denies climate change and any human influences. This is a problem – he is criticising science in general. We have to wait and see to what actually happens and how he runs the ministry from now on. The president [Dilma Rousseff] must have known about this before”, said Philip Fearnside a research professor in the Department of Ecology at the National Institute for Research in the Amazon (INPA).

The American scientist has studied the Amazon rainforest since 1992 and contributed to the world leading Intergovernmental Panel on Climate Change (IPCC) reports. These say the evidence of human influence on climate is “unequivocal”.

“The minister of S&T is responsible for a lot of research on climate change. Research institutions like National Institute of Space Research (INPE) and INPA are under this Ministry and are also submitted to the climate convention advising the negotiations”, said Fearnside.

Rebelo was also accused of disregarding a letter from scientists in debate around the future of the Forest Code. The government pushed through a reduction in the requirement on landowners to conserve and restore forest.

Fearnside said: “He went against what the scientific community advised. The Brazilian Academy of Sciences (ABC) and the Brazilian Society for the Progress of Science (SBPC) wrote a joint document criticising this proposed change in the law regarding the Forest Code. I’m a member of those groups and it was completely ignored by the Congress.”

“Aldo Rebelo made a number of statements including in his acceptance speech but also during the debates on the Forest Code. He was the author of the proposals of the Forest Code that had a lot of restriction to forest regulations. One of the criticisms was that there was going to be more deforestation and consequently more greenhouse gas emissions,” said the American scientist.

According to the biologist Paulo Moutinho, founder and executive director from the Amazon Environmental Research Institute (Ipam), the new science minister should be more careful and contain himself before expressing certain value judgments. “Prudence is a friend of reason,” he said.

“Whether he likes it or not, the guidelines from federal government are towards climate change understanding and the search for mitigation. It is a huge contradiction when he doubts about a fact that has already been proved by science,” Moutinho said.

Moutinho said it was “unlikely” Rebelo would completely reverse Brazil’s progressive position in climate talks. “It would be too risky for Brazil. The biggest disaster would be if the country took a different path”, he said.

But Fearnside said the trends were unfavourable for climate protection: “It is a serious problem for the environment but also for the relationship with the scientific community. Brazil is already going in a conservative direction.”