Secretary of State Ed Davey writes to Commission, says credibility of Brussels leadership on climate change is at stake 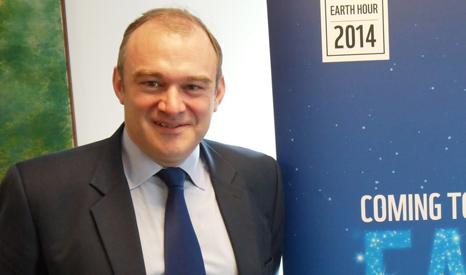 He said the UK strongly objected to plans – released on Wednesday – that would see naturally occurring carbon sinks like forests and wetlands used to meet the EU’s emissions reduction target of 40% on 1990 levels by 2030.

In a letter to European climate Commissioner Miguel Arias Canete, dated February 24 and seen by RTCC, Davey said Brussels’ credibility as a climate leader is under threat.

“Implying that the land-use sector is included has the potential to severely undermine ambitions, as land is a sink and could impact ambition by 1-2%,” he wrote.

“This is not insignificant and the inclusion or not of land within the -40% was very clear’y not agreed in the October [2014] Council.”

A perception the EU is trying to wriggle out of its climate commitments could impact alliances with other countries in the run-up to Paris, where a UN deal is set to be agreed in December, he added.

In a statement sent to RTCC, Davey said he would push for land use to be added “on top of a 40% target” where it could not be used to help other sectors avoid decarbonisation.

He also said the UK backed a goal of cutting emissions by “at least” 40%, agreed by the European Council last year but omitted in the Commission’s proposals.

“My strong view is we must now not water down our ambitions,” Davey said.

Officials from the Green Growth Group, which includes the UK, France and Denmark, are expected to discuss their response to these plans in Brussels on Thursday.

European officials released the ‘Road to Paris’, outlining the bloc’s proposed contributions for the UN pact, on Wednesday.

At the launch Canete called them “ambitious” and said they proved the EU was “leading the way”. Europe would be the first major emitter to deliver its climate pledge to the UN, he said.

But civil society observers who have closely analysed the documents issued by Brussels say they contain loopholes and ignore past decisions made by member states.

In addition to land use and the 40% target, concerns have been raised over the Commission’s claim that domestic EU commitments cannot be increased ahead of Paris.

There is also concern that the Commission has downgraded the Europe’s 2050 emissions reduction goal from 80-95% to 80%.

“The deep unease caused by this document and process is because we think this risks closing down a political and public debate about EU interests in the run-up to Paris,” said Ruth Davis, Greenpeace UK political director.

“It could leave us locked into low ambition and a pathway above 2C – and that can’t be acceptable.”

Sandrine Dixson-Declève, Director of the Prince of Wales’s Corporate Leaders Group, which includes Unilever, Sky, Shell and 3M as members, said the prospect of faltering EU ambition would concern the business community.

“Moving to include emissions from forestry and land use change in the EU’s target sends the signal to other industrial sectors that they are being let off the hook – just when greater effort is needed,” she said.

“This is bad news for our business leaders who have invested up front in low-carbon solutions and who believe that a robust target is needed to deliver wider change.”

RTCC has contacted the European Commission’s spokesperson for climate and energy for a response.