Modi to seek US backing for India clean energy development

Carbon cuts unlikely to be on agenda at key US-India meeting, but discussions will focus on access to green energy 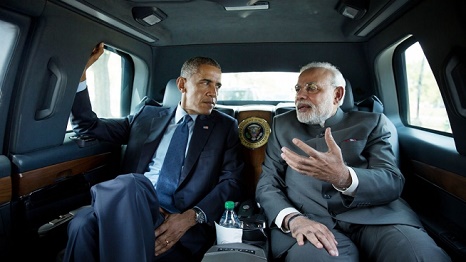 Like every other year New Delhi, the capital of India, has been turned into a fortress with Republic Day celebrations just three days away.

But this year the men in uniform are more vigilant than ever as US president Barack Obama is arriving in the city as the chief guest of the country.

He will be sharing a dais with India’s prime minister Narendra Modi and president Pranab Mukherjee at the iconic Rajpath on the morning of 26th January.

Mr Obama is the only US president to visit India twice.

In his three-day visit he will attend the Republic Day parade on 26th and hold bilateral meeting with Prime Minister Modi on 27th.

They will also speak with a group of CEOs at a gathering designed to highlight the US-India trade relationship.

Describing Mr Obama’s visit to India as a “seminal moment” for bilateral ties, a senior White House official has said that the US wanted to turn the ‘extraordinary’ potential of their relationship into concrete benefits for the people of the two countries.

The upcoming meeting between Mr Modi and Mr Obama holds pivotal significance for the world as it is likely set the ball rolling at multiple areas, from a nuclear power deal to defence ties and combatting climate change.

Since the conclusion of UN climate talks in Lima, last December, eyes are on Mr Obama’s visit to India in January.

While some expect a similar US-China like climate deal others expect this meeting to be a massive game-changer in the lead up to Paris agreement later this year.

Many international media as well as Indian newspapers have been writing about a probable climate deal likely to come out following the meet.

However, as disappointing as it may sound, there is nothing to be so excited about.

Climate change will, in all probability, be just a passing remark in the joint statement by Mr Modi and Mr Obama. There are others things to talk about during this visit.

During his India visit earlier this month, US secretary of state John Kerry said that the US was committed to working with India to reach a climate change agreement during the UN climate talks in Paris coming December.

Kerry, however, while addressing the media, very subtly added that “climate change will be a topic of President Obama’s conversation with the prime minister and we hope these conversation will take place alongside defence agreement, civil nuclear agreement as well as the economic partnership. These are very specific areas where we want to make some progress.”

Among other issues that hold significance in bilateral between India and the US include maritime security, terrorism, piracy and key political and security issues.

India-US civil nuclear issue will be the key area that both the leaders is likely to address in order to work out an amicable deal.

The US is not happy with India’s current liability rules which holds the supplier of a nuclear reactor responsible in case of a mishap, rather than the operator.

The US has always been keen on investing in India’s nuclear energy, therefore, civil nuclear deal will cover most of the talking points of the two leaders.

Report: Obama – no challenge poses greater threat to our children

India has been playing a key role in shaping up negotiations at international climate talks.

Experts across the world opine that India will be central in the new climate deal to be signed in Paris at the end of this year.

We have a large global problem of climate change and a burgeoning domestic problem of energy crisis coupled up with poverty.

At this juncture, Prime Minister Modi has announced the country’s plan to ramp up its solar energy potential five times to 100 GW by 2022.

This decision in the run up to climate talks at Lima, last year, has taken the world by surprise, especially when everyone was expecting India to follow the US-China path and announce a peaking year.

Definitely, peaking of emissions is not in the near-term agenda of India and it is highly unlikely Obama and Modi will ape another US-China announcement in New Delhi.

India gets twice as much sunshine as many Western countries that use solar power.

But the clean energy source contributes less than 1% to India’s energy mix, while its dependence on erratic coal supplies causes chronic power cuts that idle industry and hurt growth.

At present, 52% of India’s energy demand is met by coal-based power plants.

One of the potentials that Obama and Modi is likely to trap is investment in clean energy, especially in solar power in India.

According to a report by the Reuters news agency, India had earlier set an investment target of $100 billion for the next five years for all types of renewable energy, with wind taking up two-thirds of the total.

Dwelling on the key agendas for Modi-Obama talks, US Deputy national security advisor Ben Rhodes said, “We are looking to increase our cooperation in pursuit of developing clean energy, but also pursuing a successful and ambitious round of climate negotiations this year, leading into Paris.”

However, Modi’s political slogan ‘Make in India’, a national programme designed to invest and manufacture domestically, contradicts his international policy of letting the US export its solar panels to Indian market.

But, both the leaders need to show some flexibility here.

India and the US have always locked horns on the issue of phasing out HFCs.

According to a key India negotiator at Lima talks, while the US wants India to phase out this harmful refrigerant gas it is reluctant to share much details on the new technology and the costs involved in adopting it.

If India and the US really wants to work proactively in combatting climate change and partner in renewables, they need to come clean on issues of technology transfer.

At Lima, India’s lead negotiator Ravi Prasad commented that developed countries are yet to “see any meaningful conversation on IPR and technology transfer”. Modi and Obama must address those concerns.

It is only a matter of three more days before Pandora’s box is opened. Till then, prepare to watch the colourful military parade and air-show on R-Day in New Delhi.