The health of America’s children is being placed in danger by opponents to action on climate change, US president Barack Obama has said.

Addressing the US Congress in his annual State of the Union speech, Obama urged the country’s top lawmakers to work with him to radically cut greenhouse gas emissions.

“No challenge poses a greater threat to future generations than climate change,” he said. “I will not let this Congress endanger the health of our children by turning back the clock on our efforts.”

Devoting three minutes of the one hour address to global warming, Obama stressed the Pentagon said it posed an “immediate risk” to national security.

The president also mocked some of his opponents who have said they cannot discuss climate change because they are not scientists.

“I’ve heard some folks try to dodge the evidence by saying they’re not scientists; that we don’t have enough information to act.  Well, I’m not a scientist, either,” he said, to laughter from some Democrats.

“But you know what – I know a lot of really good scientists at NASA, and NOAA, and at our major universities.” 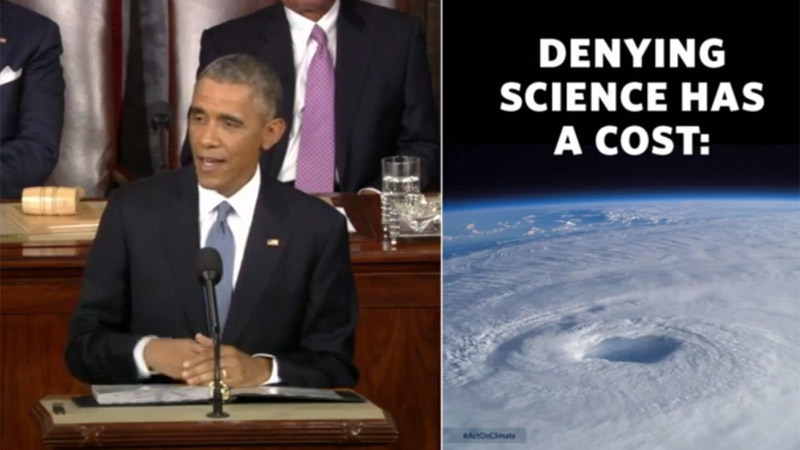 Obama said the US needed to act “forcefully” to prevent future impacts such as heatwaves, droughts and floods that could spark conflict and migration.

And hailing last November’s US-China climate pact as “historic”, the president said he hopes it would encourage other countries to come forward with carbon cuts ahead of a proposed UN climate deal.

“I am determined to make sure American leadership drives international action,” he said.

“Because the world’s two largest economies came together, other nations are now stepping up, and offering hope that, this year, the world will finally reach an agreement to protect the one planet we’ve got.”

The climate segment was greeted with applause from many Democrats, including a watching secretary of state John Kerry. The majority of Republicans, including speaker John Boehner, remained impassive.

Climate change has fast become one of the most contentious issues of the Obama presidency, with Republicans accusing the White House of bypassing Congress and enforcing carbon cuts on the 50 states. 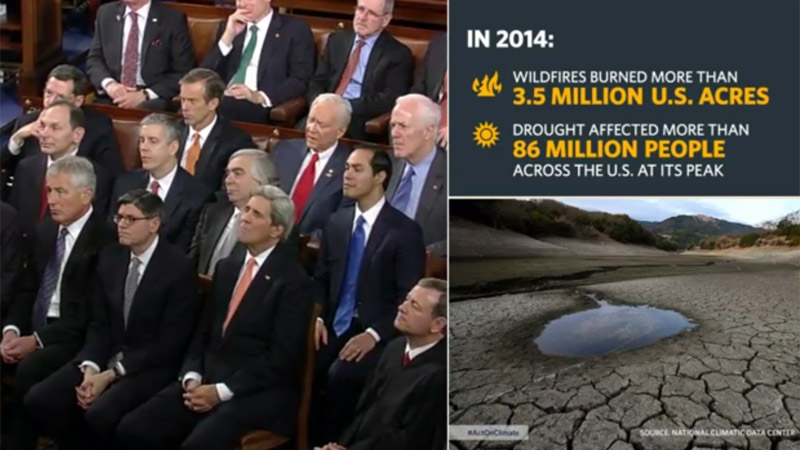 In the official opposition response, Senator Joni Ernst did not mention climate change directly, but urged the president to drop his opposition to the Keystone oil pipeline.

The debate over Keystone, which would channel oil from Canada’s tar sands to the Gulf Coast, has split Congress in an increasingly bitter battle.

The White House has said its potential impact on climate change will play a major role in determining whether it approves construction of the pipeline.

“President Obama will soon have a decision to make: will he sign the bill, or block good American jobs? There’s a lot we can achieve if we work together,” Ernst said.

But the president’s comments were predictably welcomed by development and green groups.

Andrew Steer from the Washington-based World Resources Institute said Obama could be a “catalyst” for an international climate deal.

“He can protect the planet and seal his legacy as a transformative leader in the face of this global challenge,” Steer said.

And Bill Mckibben from campaign group 350, which has lobbied fiercely against the Keystone pipeline, tweeted his support for Obama’s message.

“He’s not a scientist. But he does seem kinda like a president! Who understands the only legacy that will count longterm concerns the climate”