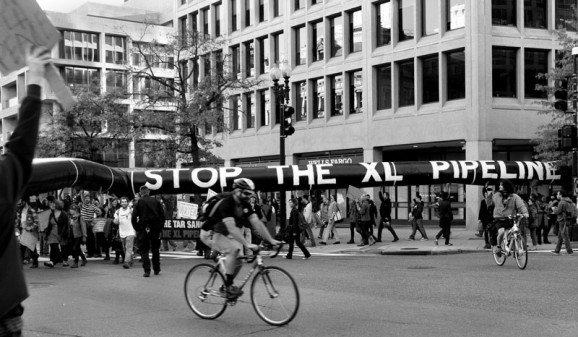 The US Senate has rejected a bill approving the construction of the Keystone XL pipeline.

Senators voted 59-41 in favour of the controversial bill, but this fell one short of the 60 needed to pass it.

The pipeline would pump carbon intensive tar sands 1,179 miles from Alberta in Canada to the state of Nebraska, where it would join pipes running to Texas.

It could carry up to 830,000 barrels of oil a day, which environmental campaigners say would lead to a spike in emissions and encourage the exploitation of the polluting oil.

This means that President Barack Obama will not have to use his veto against the pipeline, which some senators indicated he would do if the bill was approved.

But it does not mark the demise of the beleaguered bill, with Republicans promising to bring it before Congress again when they take up their majority in the Senate in January—a result of the recent mid-term elections.

John Hoeven, the senator who co-sponsored the bill, said that it was likely to get 63 votes in favour next year—enough for a filibuster-proof majority, but shy of the 67 needed to override a presidential veto.

“Getting to that magic number is a possibility,” he said.

The bill would also require a two-thirds majority, or 290 votes, in the House of Representatives to deprive Obama of his power to veto.

Although the legislation easily passed through the House on Friday, it fell short of this by 38 votes.

Extracting the tar sands and turning the bitumen into crude oil creates three times as much global warming as conventional crude production.

Supporters of the pipeline say that it will bring jobs to America and improve the transportation of oil that would have been extracted from the sands regardless.

In its environmental assessment of the pipeline in January, the US State Department said that building Keystone XL was unlikely to significantly affect the rate of extraction in the tar sands area.

Tom Steyer, the billionaire who spend millions supporting climate-friendly candidates in the mid-term elections, congratulated the Senate on their decision.

“This is a legacy-defining issue where one’s position signifies whether they are standing up for or against the next generation on the issue of climate—and with today’s vote, the Senate chose to stand up for the American people,” he said in a statement.

Politically, the Keystone XL pipeline has come to add up to more than the sum of its parts. The project was first put before the US government in 2008.

Since then, it has come to be regarded as the litmus test of Obama’s sincerity on tackling climate change.

The rejection of the bill this week marks another step forward in a week of important climate change announcements from the US, including a $3 billion contribution to the Green Climate Fund and a new target to reduce emissions 26-28% by 2025.

The US is the world’s second largest emitter of greenhouse gases in the world after China. Its actions are being watched closely around the globe, particularly as countries work towards signing a new UN climate treaty in Paris next year.

“The pipeline is a lose-lose for everyone except TransCanada. The President has all the information he needs to reject this pipeline now, and we’re going to stand by him to make sure he does.”