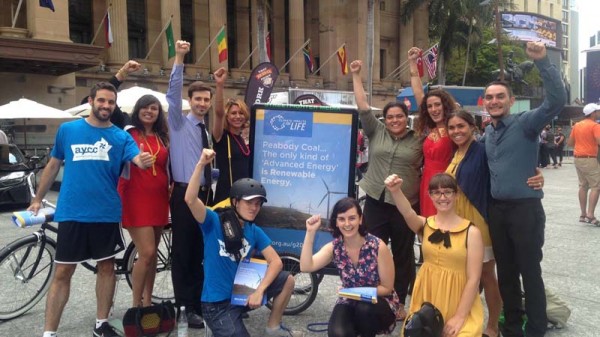 The global coal price has halved in the last three years, as demand fails to keep pace with rising production.

Coal producers, eager to find buyers, are promoting their (cheap) product as the answer to energy poverty – a message they hope to get across at this weekend’s G20 summit.

But analysts, protesters and even faith leaders have hit back at the coal industry’s claims, urging world leaders to focus on renewable energy instead.

The Advanced Energy for Life website declares: “Clean coal has the power to solve energy poverty, keep energy prices low, fuel the world’s best economies and use advanced technologies to improve the environment.”

It continues to refer to “clean coal” despite being censured by the UK’s advertising watchdog, which said the term was misleading.

It is likely to find a receptive audience with Australian prime minister Tony Abbott, who hosts the G20 meeting in Brisbane.

Abbott said “coal is good for humanity” as he opened a mine last month.

He has a record of dismissing climate change concerns and included the subject on the G20 agenda grudgingly, under pressure from other major economies.

Yet after the announcement of a historic climate agreement between the US and China yesterday, Australia looks increasingly isolated in his polluter-friendly stance.

Addressing the coal lobby on its own terms, a report by the Carbon Tracker Initiative argued that coal is not an ideal option for energy access.

Some 84% of people without access to electricity live in rural areas, the report found, which often lack access to a centralised grid.

For these people, it is generally cheaper to install off-grid wind, solar or hydro generation than build power lines and coal power stations.

“Looking, as we have in depth, at the geography and economics of energy access, the rural poor are unlikely to be the saviours of the coal industry,” said James Leaton, research director at Carbon Tracker.

The Australia Institute has revealed that the coal industry itself does not use coal to address energy poverty.

But after “extensive searches” and contact with the industry, they could not identify a single instance of coal companies using coal to alleviate energy poverty.

Rod Campbell, lead author of the report, said: “The reason not even coal-producing companies use coal is that it’s not economically rational to do so.

“It takes years and costs $2 billion to build a coal-fired power plant, so if you want to address energy poverty now, you don’t use coal.”

Youth campaigners from 32 groups around the world wrote an open letter to world leaders, urging them to resist the coal lobby’s calls.

“They claim that their industry will benefit the world’s poor,” the letter stated.

“But we know that the rapid expansion of the industry will cost those living under the poverty line their health and clean air – and they are also the most vulnerable to the impacts of climate change.”

Jonathan Keren-Black, a rabbi from the Leo Baeck Centre for Progressive Judaism, said: “This is a biased claim from an industry that is fighting for its own survival.

“Developing countries themselves recognise the wisdom of basing their development on renewables wherever possible. Their people are already suffering as a result of climate change.”

Raja Jayaraman, vice-chair of the Hindu Council of Australia, agreed: “Fossil fuels are causing significant health problems in places such as China and India as well as Australia.

“Meanwhile the price of renewables has come down dramatically and lend themselves to small-scale, decentralised energy delivery systems which are more accessible to impoverished communities.”