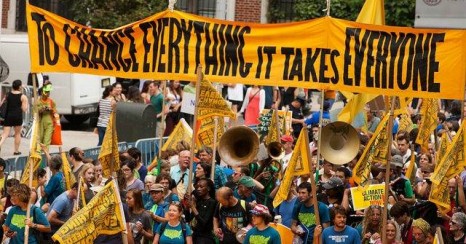 Hundreds of protestors closed parts of New York’s financial district on Monday as tensions rose ahead of the UN’s world leaders climate summit.

Offices in Wall Street were “flooded” by climate campaigners dressed in blue to represent the effect global warming is likely to have on sea levels.

Late in the evening police started to clear the area and make arrests.

Kieran Suckling, executive director of the Center for Biological Diversity, a north American green group which took part in the protests, said frustration had hit a “tipping point”.

“Failing to act is a conscious decision and one that’s unacceptable to people around the world,” he said.

On Sunday an estimated 310,000 marched through the streets of the city in support of UN efforts to create a new climate deal

And as dusk settled on the city, the lights on its most famous skyscraper, the Empire State building – built by car magnate Henry Ford – glowed green in support of efforts to cut the world’s emissions.

Elsewhere, the UN’s iconic headquarters on the banks of the East River went into lockdown, surrounded by rings of heavily armed police.

Over 120 world leaders including the presidents of the USA, Brazil, South Africa and France are expected at attend the summit, hosted by secretary general Ban Ki-moon.

Ban used a speech at the launch of New York climate week to call for more support for fossil fuel divestment: “There is no plan B,” he told an audience of business leaders.

“It’s about time leaders come to the UN,” he said. “I hope this summit will give leadership. We have a small window of time.”

The urgency was underlined by a new scientific report this week which revealed the world had around 30 years left before dangerous levels of heating are locked into the Earth’s systems.

China’s emissions are now more than the US and EU combined, it said.

But with national delegations either arriving in town or locked in negotiations, the day was given largely to business leaders to explain how they intend to address global warming.

Apple’s chief executive Tim Cook said the company planned to build the “greenest building ever”, while HP said it would cut its carbon intensity 40% by 2020 on 2010 levels.

A World Bank report released on Monday revealed that 73 countries are already implementing plans to tax carbon, along with 11 regional areas and over 1000 companies.

“We think we are at a special moment in time and this is a good place to be 15 months before Paris,” said the bank’s climate envoy Rachel Kyte, speaking at a Harvard Club event.

“I honestly think this is a new thing, as is the idea we’ll do it together.”

A coalition of multinationals including IKEA, Swiss RE, BT and Nestle also announced plans to source all their energy from renewables by 2020.

Philip Ryan, chairman of Swiss RE America, said he wanted the summit to offer more clarity on how governments intend to harmonise their low carbon plans.

“One of the results tomorrow would be to have some uniformity on this issue,” he said. “Everybody’s hoping that political leadership will become more uniform across the developed and emerging markets.”

IKEA’s chief sustainability officer Steve Howard said the company had plans to double its US rooftop solar capacity by 2020, but said it could move faster if CO2 was costed.

“Policy becomes less important as the price comes down. If we can put a price on carbon then this can be done a hell of a lot faster,” he said.

Analysis: What to watch for at the New York summit

Based on the queues for media accreditation at UN headquarters, interest in this meeting is huge across the world.

Some countries are expected to offer money to the Green Climate Fund, a new bank focused on leveraging clean energy projects in the developing world.

Others will back new forest protection initiatives. On Monday UK development chief Justine Greening committed over £140m to funds to curb deforestation.

Many more will watch and listen for clues for what individual states will push for as the UN’s separate strand of talks on a global agreement rumbles on.

Jonathan Grant, sustainability director at PwC, said the meeting was likely the biggest moment for climate change since the 2009 Copenhagen summit, scene of an abortive attempt to seal a legally binding agreement.

But he warned against reading too much into what is set to be an intense and possibly bewildering 13 hours of speeches, press releases and closed-door discussions.

“The optimist in me says we’ll hear positive things in New York from national and business leaders,” he said.

“The realist says the biggest questions will follow the summit: who’ll make the commitments and how; who’s paying for them and how much; do they add up to what’s scientifically sufficient, or are they just what is politically possible?”