Leaders from all corners of the globe will be in New York for a one-off climate meeting. Here’s what you need to know 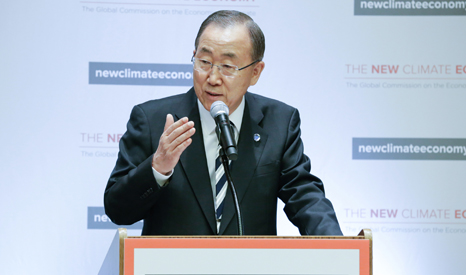 Next week New York will be the centre of a frenzied week of climate campaigning, debate and analysis, the like of which has never been seen before.

On Sunday, an estimated 100,000 people will throng the streets of the Big Apple, urging governments to act on climate change.

And on Tuesday 23 September, over 120 heads of state will descend on UN headquarters, on the banks of the Hudson river, for an intensive day of announcements, negotiations and debate.

There are just 14 months until nearly 200 countries meet in Paris to agree a global climate change treaty. But with a few exceptions, world leaders haven’t been involved in the process since 2009, the last time the UN tried to agree a deal.

The 2009 Copenhagen summit ended with an “accord“, but not one that could hold warming below 2C, the politically agreed “safe” threshold. Several big emitters were not convinced it was in their national interests to agree a climate deal. While that meeting did spur on some action, it resulted in huge mistrust between heads of state, especially the US and China.

By holding this meeting, UN secretary general Ban Ki-moon hopes he can restore faith in the process.

And by inviting business leaders to make presentations, he wants to demonstrate that you can go green and maintain economic growth – a major concern for most heads of government, especially after the 2008 financial crash.

Scientists say the world is now on a trajectory towards warming of 4C by the end of the century.

The Intergovernmental Panel on Climate Change (IPCC) says current greenhouse gas reduction targets fall well short of what is required to stabilise the climate. In a report published in April it said that countries must halve global carbon emissions by 2050 to limit warming to 2C.

Nine of the ten warmest years on record have occurred since 2000, according to the National Oceanic and Atmospheric Administration.

While climate sceptics point to a recent warming hiatus, scientists say this is due to the oceans absorbing greater levels of CO2 and heat, which they say is also contributing to acidification. Visible signs of warming are also increasingly evident, say experts.

Greenland and Antarctic ice melt is now at “unprecedented levels,” which in time will contribute to a rise in global sea levels. Droughts in Australia and California are also increasing in frequency due to climate change, say scientists.

Who will be there?

Notable absentees are India prime minister Modi, Vladmir Putin and leaders from Australia and Canada. China is sending vice premier Zhang Gaoli, who has previously led high level climate and energy talks. Who is there may matter less than what those countries say.

The UN has invited 38 members of civil society to attend the event. All the leading NGOs – WWF, Greenpeace, Oxfam – will be there.

How will it work?

The meeting will run from 0830 to 1930, New York time. Following an opening ceremony, where a film narrated by Morgan Freeman will be shown to delegates, over 120 world leaders will get four minutes each to outline their views on a climate deal.

From 1330 to 1515, heads of state and business leaders will gather for a lunch, where the scale of private sector support for climate regulations is likely to become clearer. The World Bank is also expected to release new data on the number of countries and companies pricing carbon.

From 1530 to 1830 discussions will be split into what the UN terms “thematic sessions”, covering a diverse set of issues ranging from forests and cities to climate finance and science. Leaders will also hear first person accounts of people on the “frontline” of climate change and be able to tap leading economists for their analysis of the challenges ahead.

Finally, at 1900 Ban Ki-moon will take the stage again to deliver his summary of the day. In a speech that has been worked on for months, he is likely to call for efforts to deliver a global carbon price, back plans for a long term emissions reduction goal and call for all countries to back plans to sign off a climate change treaty in Paris next year.

Are we expecting a breakthrough?

No. Even the most ardent climate activists admit New York will not be a space for a major agreement between national states. That’s a job for a separate strand of international talks, which resume in Lima in December. There, envoys hope to craft a draft text for the proposed 2015 Paris deal.

The key to this meeting is momentum. Officials hope the combination of the New York climate march, high level announcements and business involvement will create an atmosphere where governments start to believe that a climate change deal is possible.

A major climate economics report backed by nine countries and published this week could be the foundations of this belief. But there are other signals to look out for.

Carbon price: the World Bank will release details of who and where CO2 is being priced. A senior official told RTCC this would be a “substantial” list.

Green Climate Fund: The UN-backed finance body is central to the success of Paris in 2015. It wants $10 billion by the end of the year. So far it has around $1bn – France and others may make firm offers.

Zero emissions: There’s growing support for a long-term zero net carbon deadline. Perhaps in 2050 or later. Scientists say it must be before 2100. France, Germany and many poor states support this goal. Ban Ki-moon may touch on this.

Forests/HFCs: Leading multinationals such as Unilever and Marks and Spencer will recommit to achieving zero net deforestation by 2020. They will also agree to phase out HFCs, a group of refrigerants with potent climate warming properties, by 2015.

UN climate talks: New York isn’t the place for negotiations, but it is a venue for leaders to publicly support climate negotiations. This may come in the form of simple backing, or a major pledge to make the 2015 deal a key national goal.

Deliverables: US president Barack Obama is expected to touch on smaller targets and achievements, such as car efficiency standards, power plant pollution curbs and technologies that can be transferred to poorer countries.

We’ll have two reporters on the ground in New York from Sunday, so make sure you follow Ed King and Ros Donald on twitter.

On Sunday, Megan Darby will host a live blog on the climate marches across the world and Sophie Yeo will be at the London event, where Vivienne Westwood and Peter Gabriel are expected to show their support. In the afternoon we’ll have video, text and twitter updates from the New York march.

On Monday and Tuesday we’ll run live blogs all day, reporting on breaking news, bringing you interviews with key UN and government officials and offering a flavour of what could prove to be a momentous 48 hours for progress on climate change.

Later in the week we’ll have analysis and commentaries from those involved in New York, and will try and make sense of what the event actually means.

As ever, we’d love you to be involved. Follow us on twitter, facebook and google+, email us your videos and pictures, or leave your comments in the form below.