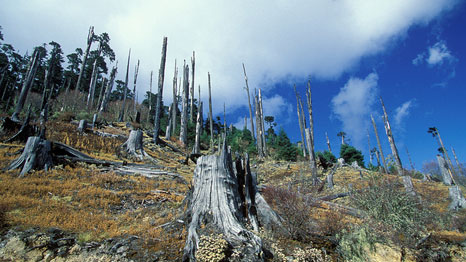 Norway is set to offer around US$300 million to protect forests in a deal to be signed at next week’s New York climate summit.

That was revealed by Manuel Pulgar-Vidal, Peru’s environment minister and president of the December climate talks in Lima, in a media briefing on Thursday.

Ban Ki-moon’s gathering of world leaders is not due to have any formal outcomes. But Pulgar-Vidal said: “In a non-formal way, we think and hope that the summit can catalyse action.”

The promised funding may help to guard against threats to Peru’s Amazon rainforest from mining interests.

In July, the Peruvian government slashed its environmental regulation to boost the mining industry.

Pulgar-Vidal voted against the move, describing it as a major setback for the country’s climate ambition, but was unable to block it.

The UN estimates that deforestation is responsible for nearly 20% of global greenhouse gas emissions. Trees release their carbon stocks as they are burned or left to rot.

Norway is one of the biggest contributors to forest protection measures.

Between 2008 and 2013, the country set aside US$3.3 billion for efforts to prevent deforestation in developing countries.

However, a review by its own government warned that the flagship UN and World Bank forest programmes were inefficient and bureaucratic.

Norway holds Europe’s largest oil and natural gas reserves. According to US data, in 2013 it was the world’s third largest gas exporter in 2013, accounting for 52% of export revenues.