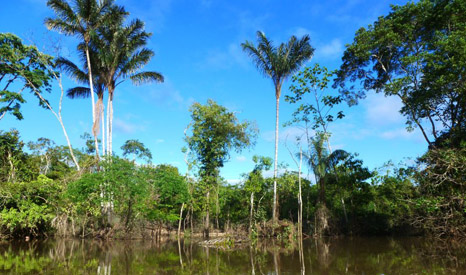 The UN and World Bank are the big winners from an international programme to combat deforestation, a report commissioned by Norway’s government has found.

It warned that the Reducing Emissions from Deforestation and Forest Degradation (REDD+) scheme, which channels millions of dollars to forest protection, is inefficient and overly bureaucratic.

Norway set aside US$3.3 billion for forest protection efforts between 2008 and 2013, but so far only $1.7 billion of that pot has been used.

“There is a danger that the growing perception that the main beneficiaries of REDD+ will be the multilateral institutions and large civil society organisations involved in processes will be found to be true,” the report, compiled by the Norwegian Agency for Development Cooperation (NORAD) said.

Forests soak up huge levels of carbon dioxide, while deforestation releases this into the atmosphere. The UN estimates land clearances for agriculture or industry are responsible for 20% of greenhouse gas emissions as wood burns or rots.

Brazil, which has cut deforestation and emissions, received US$720 million, two-thirds of the $1 billion it had allocated.

But Indonesia only saw 2% of the $1 billion it was promised, while Guyana and Tanzania also received just half of their expected funds. 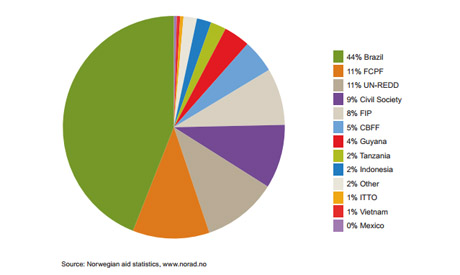 Matt Leggett, head of policy at the Global Canopy Project, a UK-based NGO that tracks forest finance flows, told RTCC the figures raised questions over how REDD+ was being managed.

“You’ve got to ask the question of whether this was achieving overall aim of the money they laid out,” he said.

“Even in their own report they admit there are fundamental problems with that approach. The UN institutions are not renowned for speed or efficiency and nor are World Bank institutions.”

NORAD said the Norwegian government’s “detached approach” to the use of its funds and the development of REDD+ had allowed “inefficiency to proliferate” among those bodies.

It also warned that implementing REDD+ placed huge pressures on countries applying for funds, and exposed the process to pressures from other ministries, such as agriculture, energy and transport.

“The World Bank’s internal review of the FCPF highlighted that the REDD+ readiness process is a more expensive, complex, and time-consuming process than originally envisaged.”

And it said many countries are unwilling to accept “results-based” help, where funding is awarded only if forest protection and carbon savings are proven. This was the “the single greatest risk to progress”.

“The problem is they haven’t been able to disburse the money because the rules they put in place have been either too stringent or the wrong set of rules to allow countries to exploit the money on the table,” said Leggett.

“Countries can do an awful lot to get deforestation rates decreasing, but as very little of it has translated into direct emissions reductions yet, it’s difficult to access the money on the table.”

Ida Hellmark, who coordinated the report for NORAD, told RTCC it showed there were evident “pipeline problems” for some countries in accessing funds, but said the pledged monies would be paid out “in years to come”.

Despite the problems distributing funds, the report highlighted some positive trends in reducing deforestation.

Indonesia had made “good progress” on designing forest protection systems, although the “future political will” of the incoming government posed a “critical threat” to ongoing success.

And Guyana had developed a “national-level monitoring, reporting and verification system”, although it said mining expansion plans could threaten progress.

But efforts to develop a forests strategy in Tanzania had stalled, said NORAD, due to a “lack of national government ownership and decision making”.