What will a right-wing government mean for Norway’s future role in international efforts to address climate change? 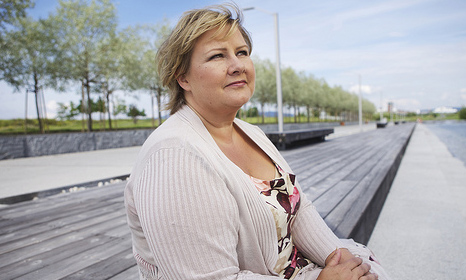 New PM Erna Solberg will have a $750 billion oil fund worth more than 150% of GDP to invest (Pic: Hoyre/Flickr)

In Monday’s election, the current centre-left coalition government lost its majority in parliament, and a new alliance of centre-right parties is expected to form a new government in October.

The outgoing government has strived to position Norway as a leader in the international climate policy field, through large financial contributions and an active role in the UN climate negotiations.

While the composition and political platform of the new government is yet to be negotiated, it seems clear that Norway’s commitment and approach to international climate policy will remain largely unchanged.

The incoming government will be decidedly more right-wing, but most of the parties that make up the new coalition have supported the same climate policy measures as the outgoing government and only the most right-leaning party contains elements of climate scepticism.

Funding for REDD+ initiatives in countries such as Brazil and Indonesia will continue, while implications for domestic climate policy are more uncertain.

But whether the change in government will lead to changes in domestic climate policy, is more difficult to predict.

On the one hand, a major oil-producer with relatively high per capita emissions when compared to other European countries.

On the other, a country perceived to be a leader in international climate policy, pledging billions of dollars to reduce deforestation in developing countries (REDD+) and taking on high-profile roles in UN bodies.

This is the balancing act that Norway has been attempting since the early 1990s.

In domestic policy, climate change mitigation is a highly contested issue, frequently clashing with industry demands for expanding oil exploration and increasing the use of natural gas.

Taking an active role in international climate policy is less controversial in a country with large financial muscles and a strong tradition as a generous aid contributor.

The current government, led by Mr Jens Stoltenberg of the Labour party, and with the smaller Socialist Left party and Centre party as junior coalition members, has actively pursued a prominent role in international policymaking on climate change.

Prior to the Copenhagen climate conference in 2009, Norway unilaterally pledged to take on an emission reduction target of 30% by 2020, compared to 1990 levels.

The target may be increased to 40% as part of an international agreement.

Arguably the most high-profile initiative, however, is Norway’s International Climate and Forest Initiative (NICFI).

Through NICFI, billions of dollars have been pledged for REDD+ efforts in Brazil, Indonesia, Guyana and other developing countries.

This has given Norway a strong role in discussions on climate finance.

Prime Minister Stoltenberg served as chair of the UN Secretary-General’s High-Level Panel on Climate Finance in 2010, and Norway is currently a member of the board of the Green Climate Fund.

While these finance and emission reduction commitments have been made by the current government, they have enjoyed parliamentary support from a broad political spectrum.

The main elements of Norway’s climate policy are anchored in a formal political agreement between the current government coalition and three out of four parties who will form the basis of the new government after Monday’s election.

The main pillars of Norwegian climate policy are therefore not likely to be affected by the change in government: Emission reduction targets for 2020 will be kept, Norway will still ratify the second commitment period of the Kyoto Protocol, and climate cash for tropical forests will continue to flow.

Some uncertainty remains as to whether the precise level of forest funding will be maintained.

The Conservative party, the biggest party in the incoming government alliance, has indicated that they might want to reduce the level of funding, pointing to the fact that large portions of Norway’s contributions to Brazil remain unused in the Brazilian Amazon Fund.

In domestic climate policy, the results of a change in government is more difficult to predict.

The new parliamentary majority consists of the larger Conservative party, the smaller Liberal party and Christian Democrats, and the right-wing Progress party.

It is not yet clear which of these parties will eventually become part of the government, and what their political platform will become.

The Liberals and Christian Democrats have strong green credentials and campaigned on tougher measures to reduce Norway’s domestic emissions.

On the other side of the spectrum, The Progress party is the only party in parliament who remains outside the broad political agreement on Norway’s climate policy.

Several of its MPs are outspoken climate sceptics.

Whether to expect tougher measures to reduce Norwegian greenhouse gas emissions will therefore to a certain extent depend on which parties who will take part in the new government.

Also in this area, however, existing agreements, e.g. on Norway’s participation in the EU ETS, will most likely ensure that the Norway paradox lives on.

Bard Lahn is a writer and climate policy analyst. He has been following international climate policy for Friends of the Earth Norway and other Norwegian NGOs since 2007. Follow him @BardLahn