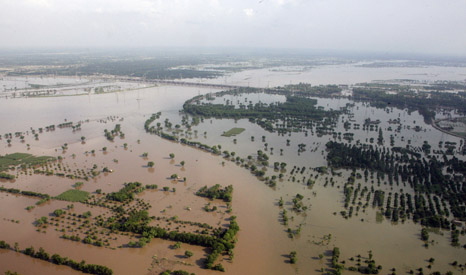 India’s government plans to assess its vulnerability to extreme weather events linked to climate change, according to reports.

The news comes after parts of India and Pakistan were hit by extreme flooding, leaving 460 dead and thousands more homeless.

“We want to understand the reasons behind such events and are also exploring international cooperation, as extreme weather events are inter-related with changes in climactic conditions in North Pole impacting the Indian monsoon,” the New Indian Express quoted an official from the ministry of Earth sciences saying.

But in echoes of last year’s catastrophic flooding in Uttarakhand, critics have accused the Delhi administration of being underprepared for the heavy rains.

In one case, soldiers in Jammu and Kashmir arriving with supplies were pelted with stones by flood victims furious at the slow response.

Chandra Bhushan, deputy director general of the Delhi-based Centre for Science and Environment (CSE) said the scale of the crisis exposed the lack of climate adaptation planning at state level.

“The Kashmir floods are a grim reminder that climate change is now hitting India harder,” he said.

“In the last 10 years, several extreme rainfall events have rocked the country, and this is the latest calamity in that series.”

Since 2005 severe floods have hit Mumbai, Andhra Pradesh, Bihar, Leh and Uttarakhand, leading to thousands of deaths and millions of dollars of damage.

Research by the London-based Overseas Development Institute suggests natural hazards such as drought and flooding are likely to keep millions below the poverty line by 2030.

Officials at the Indian environment ministry say they have “no opinion” on the relationship between global warming and the rise in flooding, despite evidence the two are linked.

The CSE says it is clear seasonal heavy rains are getting stronger, and have been exacerbated by unplanned developments along river banks and on flood plains.

“All models and all scenarios project an increase in both the mean and extreme precipitation in the Indian summer monsoon,” it said.

The government says it plans to expand the country’s network of forecasting stations, building nine extra radars in Himalayan cities by 2017.

But it remains unclear whether the national government is willing to amend and enforce planning laws to make sure buildings and communities are better equipped to deal with intense events.

Other key concerns include inadequate government regulation of land use, rising levels of deforestation and a proliferation of hydropower plants in the Himalayas.

“To begin with, the Indian government must discard its ostrich-like policy and get out of its denial mode,” she said.

“We will have to see the linkages between climate change and the events such as those unfolding in J&K.”