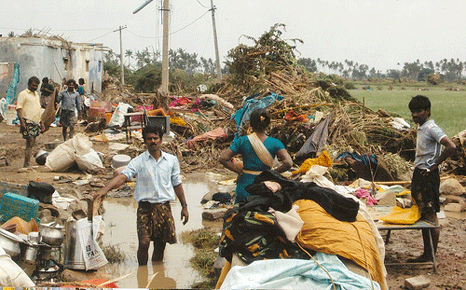 Natural disasters in some of the poorest parts of the world pose a terminal threat to success in the global battle against poverty, says a new report.

The Overseas Development Institute (ODI) research, costing around £60,000, estimates that around a third of a billion extremely poor people will be living in countries highly exposed to natural hazards such as drought and flooding by 2030.

Speaking to RTCC, lead author Tom Mitchell, the ODI’s head of climate change, warned that by 2030 around 325 million people will be living in countries acutely vulnerable to volatile changes in the weather.

“We know that disasters entrench poverty – they don’t just end lives, they destroy shops, roads, crops, houses and hospitals in places where there are no safety nets such as insurance or social security,” he said.

“Without meaningful change, talk of the end of extreme poverty is pie in the sky.”

The report, Geography of Poverty, Disasters and Climate Extremes in 2030, warns that by 2030, 11 countries will have high numbers of people in poverty, high exposure to natural disasters and inadequate capacity to minimise these impacts.

Bangladesh, Pakistan and most of the countries in central Africa are identified as high risk, together with India, despite its status as one of the world’s leading emerging economies.

“In India we still expect a reasonable high number of people living in poverty in 2030,” Mitchell said.

“Even though there’s been spectacular progress there’s also a spectacular number of people involved, so there will almost certainly be a residual number in poverty in 2030.”

The report comes at a time when the Indian states of Andhra Pradesh and Odisha [Orissa] are recovering from one of the fiercest storms to hit the Bay of Bengal in 14 years.

Cyclone Phailin destroyed homes and land in the region over the weekend, home to nearly one in four people on earth.

Only 15 people have been reported dead, and analysts say warnings from meteorologists helped to prepare the country by positioning emergency response teams and food and water supplies and by evacuating nearly a million people.

The army, navy and air force were put on standby, and power and telecoms companies were instructed to be ready to restore damaged infrastructure as soon as possible after the storm.

A total of 8 million people were affected along with 300,000 hectares of crops damaged. The loss amounts to about INR 1400 crores (approximately $228 million).

Scientists predict a rise in the frequency and intensity of the Bay’s cyclones. Over the past decade, more than 18 million people have been affected directly by tropical cyclones in Bangladesh, Myanmar and Thailand alone.

In a Swiss Re report last month, the reinsurance company said countries like India and China in particular urgently needed decisive climate action from city leaders to prevent natural disasters.

On the other side of the country to the Bay of Bengal and Cyclone Phailin, residents in Uttarakhand were not nearly as lucky.

In July, experts said that inadequate government regulation of land use, messy and haphazard construction of buildings, and rapid cutting of trees in Uttarakhand could be attributed to the flood in the region and the reported 600 dead.

Mitchell said the difference between the flooding in Uttarakhand and the response to the cyclone in Andhra Pradesh and Odisha brings home the essence of the report that the extent of the damage caused by natural disasters need to be looked at on a state-by-state basis and probably also on a hazard-by-hazard basis.

“It’s really great that so many lives were saved [during cyclone Phailin], but if we’re really focused on this task of ending extreme poverty by 2030 then we need to also focus a lot on the impact on people’s livelihoods and to make sure that the disasters don’t negatively impact the poorest people.”

Completed over nine months, Mitchell said there is still plenty of scope for more research.

“I think in terms of where we need to take this is look at much more of [the] household survey data in more countries to really understand much more about which disasters and which types of hazards are likely to cause impoverishment and if we find that out I think we can also begin to make clearer recommendations [to policy makers] how to prevent this.”