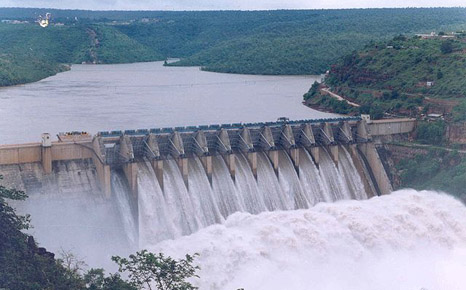 Hydropower is claimed to exacerbate the destruction caused by flooding. (Source: Raj srikanth800)

The poor construction and locations of hydropower projects in Uttarakhand appears to have exacerbated the recent flooding and raised questions over India’s planning regulations.

Unseasonally heavy rain in June triggered a series of water surges down Himalayan valleys, leading to over 1,000 deaths with thousands more left stranded.

Construction in and around riverbeds has been partially blamed for the level of casualties, as has high levels of deforestation in the region.

But the proliferation of hydropower plants is also a target of local anger. Some say they have eroded riverbanks making them weak and narrow, unable to hold their structure during intense flooding, which experts agree will be a regular occurrence due to the effects of climate change.

Around a quarter of northern India’s installed power generation capacity comes from hydropower.

The floods in Uttarakhand caused severe damage to six hydro power plants of which four were operational with a total installed capacity of 3,426MW along the Ganges and its tributaries, according to the Indian Express.

Another 95 projects with a total capacity of 12,235MW are in various stages of development.

India’s Ministry of New and Renewable Energy (MNRE) has authorised sites predominantly near the Himalayas where it envisages 15,000MW to be installed by 2017.

Analysis from the Centre for Science and Environment (CSE), a New Delhi-based research and advocacy body, said the small hydropower sector (plants under 25MW) exerts a significant impact on the environment.

“We are looking at deforestation done to construct project facilities such as roads, power houses and transmission lines,” said Chandra Bhushan, Deputy Director General at the Delhi-based Centre for Science and Environment. “There is increased soil erosion, disruption of local fauna and flora, disturbance of hill slopes.”

A report by the Asian Development Bank (ADB) said there were substantial hydrological and geological risks associated with hydropower development. Development of hydropower puts “stresses on the roads and other infrastructure as well as on the fragile Himalayan ecosystems.”

A recent World Bank study in Himachal Pradesh and Uttarakhand identified shortcomings in the planning and coordination of hydropower development, according to ABD. This was attributed to individual units as well as the lack of coordination among developers.

Despite rising concerns in the region Chief Minister of Uttarakhand Vijay Bahuguna continues to strongly support the hydropower projects in the region.

“World over more than 40% energy generated is from hydro power. We are doing an environment impact study of every river, so that we have a ready data base about the environment condition” Bahuguna recently told The Hindustan Times in an interview.

Andrew Jeffries, a senior energy specialist at the ADB, which has invested in several projects in Uttarakhand, as well as neighbouring Himachal Pradesh that were devastated in floods last month told RTCC that “muck” was a dominant force in exacerbating “[flood] damage”.

Muck is rock and debris from tunnelling that is stored or dumped from the construction of hydro power projects. “If you dump muck in the wrong places it can be dire, and then you have torrential water [which] can exacerbate damage,” he said.

“Rock and debris flowing quickly along with the water as opposed to just water… the potential for damage is higher.”

“During the last few years, the river course has narrowed due to dumping of muck generated by hydro power projects. During flood like situations, gushing water and muck can cause extensive damage to population downstream”, said Ghuman Singh, convener of Indian charity Himalaya Niti Abhiyan.

It’s not an issue confined to India. Across the Himalayan region, governments are working out how they can tap into the vast power that the mountain rivers can provide.

Fly east and the controversial Tipaimukh hydroelectric dam could require the destruction of 227 sq km of forest in the state of Manipur, located near the border of Bangladesh. Commissioned in the 1980s, Bangladeshi authorities have held up the construction of the dam citing environmental concerns.

“What is most disconcerting is that despite the losses there is no recognition of the ecological fragility of the landscape,” said Manshi Asher of Himdhara Environment Research and Action Collective.

“The three large hydro-electric projects that have been built and are operational in the valley, and many other which are under construction are central to exacerbation of the fragility of the area – both by bringing about deforestation, climatic changes and by affecting land stability.”

“In Uttarakhand as in Himachal Pradesh, the entire area is considered forest land whether there are trees there or not. Every time you cut down a tree you’re required to plant two more,” said Jefferies.

“Water flow is scrutinised by the central electricity authority as part of getting rid of permits that constructs [hydro] projects. There’ll have to be an environment impact assessment process, a disaster management plan [and] a muck management plan.”

Despite the apparent regulations in place, Richard Kamei, a blogger at the Indian political website Kafila, noted that in six years, none of the 162 hydropower plants to be developed in northern India were rejected by authorities.

The north eastern state of Arunachal Pradesh has the highest number of plants – 42 with a combined installed capacity of 27,293MW, while Uttarakhand is second with 33 worth 5,282MW, according to figures from the Central Electric Authority.

“This prospect is alarming when many similar projects are coming up in Arunachal Pradesh and other parts of Northeast India,” said Kamei. This area suffered heaving flooding in May this year.

“Did hydro power cause all the problems in Uttarakhand and other regions?” Jeffries asked. “The flooding would have happened with or without hydro power.”

Hydropower projects in countries like Egypt and Brazil are slowly becoming a dirty word, largely due to the savage environmental impacts construction can wreak.

In June, the Egyptian government voiced its complaints against the construction of the 6,000MW Grand Ethiopian Renaissance Dam on the river Nile.

Worse yet, indigenous groups in the Amazon have held protests against seven hydroelectric plants planned for the Tapajos region which could submerge half the villages of the Munduruku tribe.

The project is part of the government’s plan to build and auction 33.7GW of hydropower capacity in the Amazon through 2018.

It raises a critical dilemma for environmental campaigners, well aware that sourcing low carbon energy is a priority for developing nations.

“Development must take into account environmental concerns so that it is sustainable. Uttarakhand and other states must utilise their hydropower potential in an ecologically sustainable manner,” said Chandra Bhushan

“This means that standards, guidelines and safeguards should be put in place that will bring the much needed balance between environment and development.”