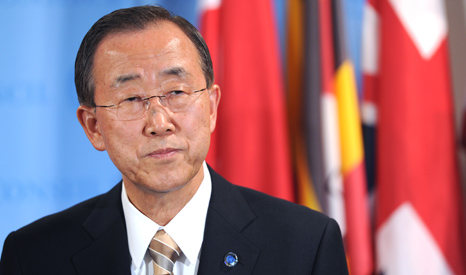 Driving up levels of financial support for developing countries should be the top priority for Ban Ki-moon’s forthcoming climate summit.

That is the view of Ecuador’s lead climate negotiator Daniel Ortega-Pacheco. He says the UN secretary general has the power to tackle one of the most contentious issues holding back progress on a world deal to limit global warming.

The New York meeting, scheduled for September 23, will bring together heads of state, business leaders and civil society for a day of intensive talks on ways to curb rising greenhouse gas emissions.

Ortega-Pacheco, who has seen a draft of Ban’s final outcome document, says there are “encouraging” references to a global carbon price. He wants the UN’s top official to push for greater financial assurances from wealthy countries, however.

“If Ban Ki-moon wants to prove he can bring groups together, he needs to bring them together around finance,” Ortega-Pacheco told RTCC.

“It is of utmost importance to get a real handle on the climate change issue in this region… the political interest is there, and Ban Ki-moon may have the political muscle to find that space for common understanding.”

Developing countries say they need billions in financial support for low carbon infrastructure and energy systems, to ensure they don’t have to rely on fossil fuels.

Around $30 billion was delivered by governments between 2010 and 2012. This flow has since slowed, although leading development banks are still offering significant support.

Earlier this year the UN’s flagship Green Climate Fund (GCF) finally launched, with a plea for an initial US$10-15 billion of capital. So far only Germany, Norway and France have committed funds.

Ortega-Pacheco said the successful launch of the GCF is a “major expectation” for developing countries, who in 2009 were promised $100 billion a year by 2020, a sum that so far remains elusive.

And he said the UN’s main climate summit of 2014, in Lima this December, must finally crack the funding dilemma or risk stalling progress towards a Paris deal in 2015.

“Lima has to be a financing COP [conference of parties] – I don’t see another real alternative if we want to see real action taking place on the ground,” he said.

The UN’s Peru meeting is also likely to see the release of a draft negotiating text for a climate agreement, outlining who will take part and elaborating on its legal nature.

Last month the two UN officials tasked with co-chairing discussion released a wide-ranging set of options designed to focus minds on what the text could look like.

Speed is deemed essential, as officially a final text is needed around six months before it is due to be signed off, so countries can examine what its impacts could be.

But Ortega-Pacheco said Ecuador, which sits in the Like Minded Developing Countries (LMDC) group, does not believe the latest proposals are a clear platform to work from.

“The co-chairs so far have not been very helpful taking the group to a common position. Sometimes we perceive that some of the voices have not been heard,” he said.

“If you look at the LMDC proposals we put forward for a draft negotiating text, and you compare that to the co-chairs one… it’s like – there’s not hearing. We hope there is more hearing in Lima.”

The 12-country LMDC bloc, which includes China, Egypt, India and Saudi Arabia, has a reputation at UN talks of blocking efforts to make all countries liable to cut emissions.

Last year the EU’s climate chief Connie Hedegaard became embroiled in a bitter row with some of its members, after accusing it of trying to “reinstall the firewall” and prevent developing countries from making carbon cuts.

The intervention prompted a fierce response from LMDC spokesperson Claudia Salerno, a Venezuelan diplomat, who said Hedegaard was “starting a blame game through the media”.

Acknowledging that some observers see it as a troublesome group, Ortega-Pacheco stressed LMDC countries are committed to a deal in Paris, and called on the EU to try and work with its members in the lead up to Lima.

“I was not amused to see how Connie Hedegaard interpreted our attempt to contribute to the negotiations as a group… and I remember the statement of Claudia was very straightforward,” he said.

“At the end it was a blaming game that was not positive or productive for the discussions. I really hope that this year we can find each other in a more constructive fashion.”