A new negotiating alliance has revealed itself at the UN climate change talks in Bangkok.

The Like Minded Group (LMG), which first attracted attention at the Bonn talks in May, has now identified itself as a formal negotiating bloc. 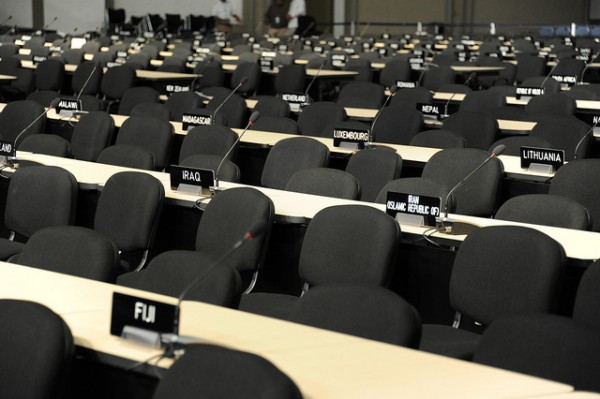 The UNFCCC may have to prepare a new nameplate for the Doha talks in November for the new Like Minded Group. (Source Flickr/UNFCCC)

It is made up largely of the Arab Group, India, China, emerging Asian economies such as Malaysia and the Philippines and some of the most vocal South American nations including Venezuela, Bolivia and Cuba.

It has already been meeting in an informal capacity within the long standing G77 and China group of developing nations.

“Developed countries would probably characterise it as a problem group, I think they would consider this as a group that would probably try and drag out the work of the Long-term Cooperative Action (LCA) stream of talks. They will be watching this development with concern,” said Tasneem Essop, WWF’s delegation head in Bangkok.

“It’s a fascinating group of countries and quite a powerful one,” said Essop.

A leading African Minister told RTCC at the Rio+20 summit that China’s ambition often meant that its goals were no longer aligned with the rest of the G77 group.

A ‘Like Minded Group’ has appeared in a number of other forums including the EU, UN Human Rights Council and the WTO, frequently uniting diverse groups of countries around a handful of central issues.

The motives of this new negotiating bloc at the climate talks will be heavily scrutinised.

While grouping does contain some OPEC members, the UAE, Russia and COP18 hest Qatar are absent.

While the tiny gas-rich country has forged its own path in diplomacy in recent years, several sources have expressed concern to RTCC that its climate change policy is heavily influenced by its neighbours in Saudi Arabia.

“There are a lot of different rumours running around about whom is running the like minded group; I don’t think that is necessarily helpful,” said Liz Gallagher, senior policy advisor with the environmental consultancy E3G.

“They are not perhaps the most progressive forces in international affairs, however, they have common interests and they are being active and putting forward submissions, so in some sense at least that’s useful because they are showing a different opinion within the G77,” she added.

There is a lot of speculation about them at the moment because they are new and fresh and fluid and I think things will calm down but it does seem like they are starting to really make an impact on the negotiations themselves. I wait with bated breath to see how helpful they are going to be given the member countries involved, but you never know.”

While it is clearly a diverse group, they are ardent proponents of equity and the concept of Common But Differentiated Responsibilities and Respective Capabilities (CBDR and RC).

CBDR and RC means countries are not all equally responsible for the current state of the atmosphere or obligated to make the same efforts to cut emissions. It is written into the UN Framework Convention on Climate Change and is supposed to underpin all of its proceedings.

As well as this, the LMG is expected to press hard for climate finance and ambitious emission reductions from developed nations.