Moscow’s historic links with US, Australia and Ukraine at UN climate talks appear unlikely to last after current crisis 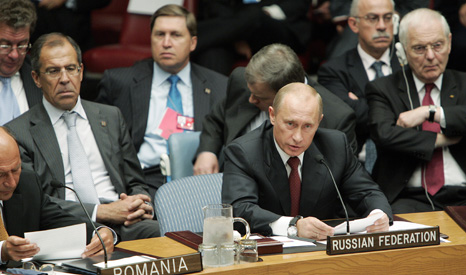 Fears are growing that Russia could find itself isolated at UN climate talks as a result of the ongoing Ukraine crisis, which has led to sanctions from the US and European Union.

Since 2005, the world’s top oil producer and fourth largest greenhouse gas emitter has been a member of a nine-country coalition including the US, Ukraine, Canada and Australia.

But it seems increasingly unlikely the Umbrella Group will survive, given the rapid deterioration of diplomatic relations between Moscow, Kiev, Washington and Canberra.

Negotiations on a global climate change deal are now entering a critical stage, with a draft text due in December and a final agreement to be signed in Paris at the end of 2015.

Maas Goote, the EU’s lead climate negotiator between 2008-2010, told RTCC diplomats are now confronted with an “unorthodox cold war situation”, which they have not faced for 25 years.

“Russia is always a black box in terms of its positions and interventions,” he said.

“We never know what it will do at the closing plenary and this is one of those forums where you can find out what they’re thinking. It’s an important group for diplomatic reasons.”

Were the Umbrella Group to dissolve, he said it would make reading Russia’s intentions far harder, as the country does not participate in any other official UN groupings.

Goote’s view was echoed by Ecuador’s lead climate negotiator Daniel Ortega, who said outside events would make talks ahead of Paris more challenging.

“It is a bit of concern, because climate change is not only an environmental discussion but politically, on how we are moving to sustainable development and poverty eradication,” he said.

“It is impacting – what is happening outside the agenda – and it’s a concern.”

The consequences from the ongoing Ukraine conflict have already seeped into the talks, with diplomats from Kiev and Moscow now banned from cooperating at meetings.

“For Russia this is the only informal group where they can actually be part of a bigger group that’s not former USSR,” he said.

Russia has already been involved in a number of heated exchanges at the UN talks over the past three years, complaining over the UN decision making process in 2011 and 2012.

Last year climate negotiator Oleg Shamanov told RTCC he hoped the process could move on after what he termed “outrageous violations”, where he felt his views were ignored by UN officials.

“We want to talk about the future. We do not seek to overrule the decisions already taken, no matter how dubious the legality of some of them may be,” he said at the time.

Recent moves to boost coal production with US$7 billion of state funding angered local green NGOs, with one telling RTCC the country’s policies were “killing the climate”.

Last month the European Commission blamed Moscow for blocking its application to sit on the board of the Green Climate Fund. Under European law, that means Brussels cannot directly supply funds to the UN body.

The dismissal of deputy economy minister Sergey Belyakov for criticising the government on Facebook also leaves the Kremlin without a high-profile supporter of climate regulations.

And with limited options in the face of tough new economic sanctions from the West, Russian president Vladimir Putin could see the UN climate talks as a forum for “counter measures”, said Goote.

“He’s looking for arenas where he can push back and roar, and it seems to me that the climate change arena is a perfect place to be difficult,” he said.

“They’ve always been a reluctant participant, and they’ve made some procedural trouble, but this may well be a perfect arena to be difficult – especially to the EU.”

Not all observers are so gloomy. Shane Tomlinson, an Associate Fellow at the Chatham House thinktank told RTCC the UN climate talks had historically succeeded in ignoring outside events.

But he said the spate of current crises made UN secretary general Ban Ki-moon’s climate summit on September 23 a critical platform to rebuild trust between countries.

Billed as a day for heads of state to declare their commitment to a UN climate treaty in 2015, it could also offer the space for quiet diplomacy between unlikely allies.

“One of the real values is having world leaders work on the politics, the alignment between countries and work on those issues of trust, so that when it comes to doing or not doing a deal in Paris, they have a much better understanding of their counterparts,” he said.

“They’re never just talking about climate change in isolation. [UK prime minister] David Cameron has to balance that with other issues that are going on, as does [US president Barack] Obama and other world leaders. That’s one of the real values of the Ban Ki-moon summit, and I think it would be a mistake to just judge it in terms of progress.”