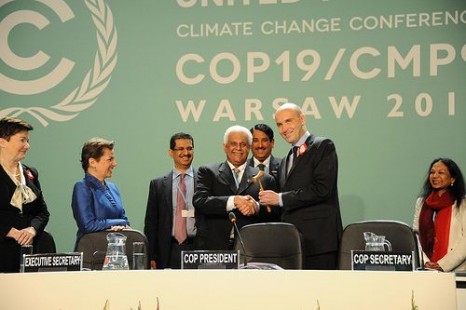 Russia’s representative at the UN climate summit hopes concerns over how decisions are reached at the negotiations can be settled by the end of the current conference.

Oleg Shamanov told reporters it was important to “heal the process” after what he termed “outrageous violations” at previous meetings.

Russian anger can be traced back to the last two sets of UN climate negotiations, where the country’s delegation felt its objections to decisions adopted by the Conference to the Parties to the UN Framework Convention on Climate Change were ignored.

Shamanov added Russia could seek expert opinion from the UN’s main Office of Legal Affairs over how disputes in this forum might be resolved.

“Our aspiration is forward looking. It’s not about the past,” he said.

“We want to talk about the future. We do not seek to overrule the decisions already taken, no matter how dubious the legality of some of them may be.”

Decisions at the UNFCCC are reached through consensus rulings. Typically it is down to the President of the summit to judge if they have the support of countries to announce an agreement.

UN talks in June ground to a halt when Russia, Belarus and Ukraine demanded the decision-making process was discussed.

A proposal submitted by Russia and Belarus to the Warsaw meeting calls on parties to the UNFCCC to recognise the ‘sovereign equality’ of all states, as well as the importance of transparency in the process.

“The Secretariat bears responsibility for providing counsel to the presiding officers,” he said, adding: “what else can we say when equality is violated, like not recognising the right to speak?”

In a telephone interview, former Netherlands lead climate negotiator Maas Goote told RTCC substantive rather than procedural issues were the main cause of disagreements, but acknowledged the process had its flaws.

“Frankly, we have been tweaking the consensus rule. We adopted the text of the Kyoto Protocol with seven countries raising their hands, but the hammer came down anyway,” he said.

“There is no guarantee that if you as a sovereign state object to the adoption of a text, that your objection are honoured. You don’t know if the consensus rule is applied correctly. And as long as you don’t know that, I can understand you get nervous.”

Separately, Shamanov said he is hopeful the Warsaw talks will be able to resolve differences over how a global emissions reduction deal will be constructed.

And he said a series of dates and targets for countries to meet between now and 2015 will be necessary to ensure the process maintains momentum.

“Time is short for the exercise, but we hope that one of the major deliverables of Warsaw will be the roadmap, and in no way would I like to underscore that we see the Warsaw conference as just an intermediate conference.”