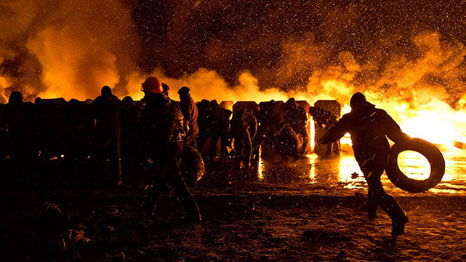 Ukraine is no longer allowed to cooperate with Russia at the UN climate talks, ending one of the firmest bonds around the negotiating table.

The crisis between the two former Soviet states broke out earlier this year, when Russia annexed Crimea in response to Ukraine’s decision to pursue a closer relationship with the EU.

Since then, Ukrainian negotiators have been forbidden from cooperating with Russia at international talks, where 195 countries are trying to reach a deal on climate change under the banner of the UN.

“This is the political process and we have political instructions not to cooperate with Russia in an official manner,” said Mykhailo Koval, who is director of the International Cooperation Division at Ukraine’s State Environmental Investment Agency, and a negotiator at the UN climate talks.

“We have an instruction not to allow Russia to represent Crimea as part of Russia.”

Russia and Ukraine have traditionally been close allies within the UN’s climate process, supporting each other over opposition to the Doha amendments to the Kyoto Protocol in 2012 and a related dispute over UN procedure in June 2013.

This era of cooperation is now over, said Koval, replaced by the prospect of conflict between the two countries on how to count the emissions from Crimea, which both claim is now their territory.

To abide by UN rules, countries must provide ‘national inventories’ of the greenhouse gases emitted by their country.

If the problems between Russia and Ukraine are not resolved by 2016, said Koval, both nations could end up submitting inventories that include Crimea. In 2012, Crimea emitted around 2,757 tons of CO2 compared to 231,997 tons from the whole of Ukraine, according to the State Statistics Service of Ukraine.

“At the moment, neither Ukraine nor Russia have any idea how to deal with the issue,” he said. “Probably this will be the question under some negotiation with Russia, but Russia is not ready to have any negotiation.”

He added that, logically, Ukraine should have no problems submitting an inventory including Crimea, since the UN itself does not recognise the outcome of Russia’s referendum in Crimea—“But there’s always a political issue and nobody knows what will happen.”

If the Ukraine signs an economic association deal with the EU, it will be bound more closely to the 28-state bloc within UN climate negotiations, committing the regions to greater “cooperation at regional and international level … in the context of multilateral agreements such as the UN Framework Convention on Climate Change.”

Ukraine’s newly elected president, Petro Poroshenko, has indicated that he is willing to sign the economic deal imminently, after agreeing to greater political cooperation with the EU in March.

The EU has typically pushed for an ambitious approach to tackling climate change within the talks, and the Commission hopes that its 40% greenhouse gas reduction target will be confirmed by heads of states no later than October. It recently announced that it had overshot its 2020 target by 4.5%.

An annex to the EU Association Agreement also says that Ukraine must implement the Kyoto Protocol and develop a long-term plan on how it will tackle its emissions and adapt to the impacts of climate change.

Unlike the EU, which is in the process of ratifying an extension to the Kyoto Protocol, Russia has refused to join in the with second phase of this deal on how to reduce pre-2020 emissions. 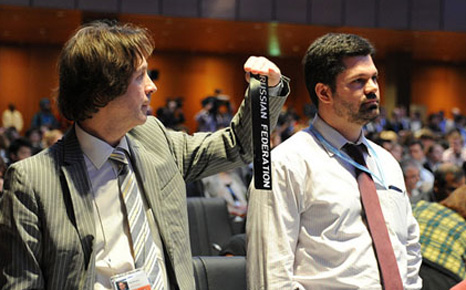 Koval said that Ukraine is “definitely willing and totally ready to implement” the climate demands of the new EU agreement, which he believes will advance development in the country. “It means the energy efficiency and climate change policy in Ukraine will be totally changed,” he said.

“The Ukrainian people are willing to do it. The people made their choice and decided to go towards the European values. It could be funny but Ukrainians died for it. The situation would be a really dramatic change.”

Despite the political tension between the two nations, Koval stressed that he remained “good friends” with Russia’s representative, Oleg Shamanov, within the talks.

Several other negotiators confirmed to RTCC that the two were frequently spotted conversing over lunch and within the plenary hall at UN talks taking place in Bonn this week.

“Personal relations are not political relations, and he is not responsible for what Mr Putin is doing,” Koval added.