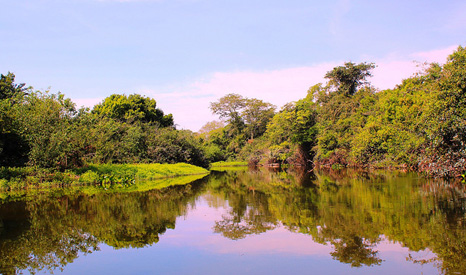 Indigenous populations such as the Tukano live on parts of the Upper Rio Negro (Pic: Flickr/dany13)

Indigenous communities in Brazil may be the solution for preserving the Amazon rainforests and avoiding climate change, according to a new report.

It says indigenous territories (ITs) in Brazil stand as a successful model for a deforestation resistance.

The study reveals that strengthening community forest rights is a low cost strategy to preserve at least 37 billion tonnes of carbon “safely stored” around the world.

It is, according to Andy White, president of the RRI and one of the leading experts on this topic, an effective policy approach to mitigate global climate change through carbon sequestration.

“The most important finding is that recognition of rights is an effective strategy to reduce emissions,” White tells RTCC.

“Without the indigenous people protection of the forest, climate change will get much worse. Communities are already conserving about a third of forest in tropical countries.”

Communities hold legal rights to more than 500 million hectares of forests globally, about one eighth of the world’s total.

The report warns that 13 million hectares of forest are cleared every year at a rate of 50 soccer fields a minute. 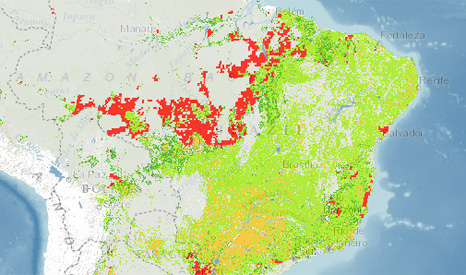 It is by far the most rigorous analysis of this question, argued the leading expert.

“When we started the study our question was what type of forest ownership is best for the climate: government, private or community owned? We were trying to understand from the climate perspective which type of ownership would be the best performer,” White says.

For White, most of the tropical forest is in the Amazon, Africa and Asia, but a great proportion of the deforestation worldwide takes place in Latin America.

“Compared to some other options like establishing carbon market, shutting down all cars and trucks, options to reduce emissions are most costly than the recognition of a community rights,” he said.

Brazil is home to some of the most carbon-rich forests in the world, with about 63 billion tonnes of carbon locked in.

The Amazon region alone  holds 10% of the carbon stored in all land ecosystems: “communities are more than 10 times effective than government in stopping deforestation,” he says.

Brazil’s Indigenous Territories (ITs) play a significant role in keeping C02 emissions from the atmosphere, reveals the report.

Legal rights could contribute to preventing 27.2 million hectares of deforestation by 2050 in this country. That is 12 billion tonnes of carbon dioxide emissions that could be avoided.

From 1980 to 2007, about 300 ITs were legally recognized. According to the latest national census from 2010, the indigenous population in the country accounts for almost 900,000 people, divided in 305 different ethnic groups speaking over 270 languages.

Most of the indigenous people live in the countryside spread in the 505 ITs, identified by the National Indian Foundation (FUNAI). The ITs in Brazil represent 12.5% of national territory – 196,700 hectares with more than 500 thousand Indians living in the area.

“They prevent logging, roads, mining and other forces that will destroy the forest. In many places in the world, governments are still promoting deforestation, industrial logging, clearing for soy, beans and palm oil,” White says.

“It is very clear that when indigenous people own the forest they can protect it. From the climate perspective, community and indigenous ownerships are the right solution for the climate.”

According to White,  the ITs are a “tremendous model of success” by ensuring that over a 100 million hectares of forest are protected. Unfortunately, in the last few years President Dilma Rousseff’s administration has been “weakening” the historical support for communities as well as slowing down the recognition of those territories.

And White is critical of the official mapping and registration process, which he says has proved slow.

From 2000 to 2012, WRI deforestation analysis for the Brazilian Amazon, showed that forest loss was only 0.6% inside Indigenous Territories compared with 7% outside. Community forests in the Amazon tend to be carbon-rich containing 36% more carbon per hectare than areas of the Brazilian Amazon outside ITs.

Although the country is one of the largest emitters of greenhouse gases from deforestation in the world, it seems increasingly clear that the deforestation emissions are not coming from community lands.

The study also discloses that those traditional communities are more effective in resisting threats. However sometimes they are not able to handle the enormous pressure, especially from mining, industrial logging and infrastructure projects like building of roads, dams and pipelines.

For the representative of the RRI, Brazil has two challenges nowadays: one stands for concluding the demarcation of indigenous lands and the other one is to ensure the full respect of community rights.

The Tukano are 6,000 people living in the border with Colombia and Venezuela spread in five different ITs on the upper stream of the Rio Negro river.

The Federation of Indigenous Organizations of the Rio Negro (FOIRN), is aimed at developing a sustainable program for their people.

“Without the land we Indians do not exist. The forest is connected to us and we are connected to the land. The forest only survives because we indigenous live there. As soon as we disappear, there will be no more forest.

“We won’t have a standing forest because of humanity’s greed, worried only about profits and progress,” says Maximiliano Correa Menezes, also known as Max Tukano, the general coordinator of the Coordination of Indigenous Organizations of the Brazilian Amazon (COIAB).

Tukano belongs to the Alto Rio Negro IT, a 7,9 million hectares piece of land that gathers a population of 40,000 people divided into 23 ethnic groups (like Tukano, Wanana, Karapanã, Baré, Barasána, Arapáso) living in 700 tribes. 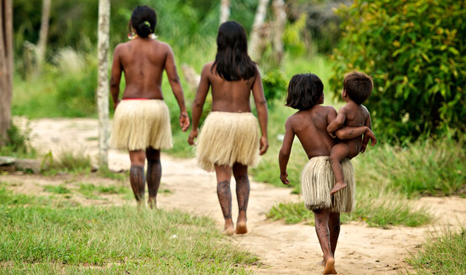 The Tukano live in the northwestern Amazon, along the Vaupés River and the surrounding area (Pic: indiostukanos.blogspot.com)

He tells RTCC that the importance of their rights recognition is related to their cultural past traditions preservation as well as to their healing treatment with the use of medicinal herbs.

“Indigenous lands should be recognized so as the Indians may survive. As long as there are indigenous people, the forests will be standing up. Land is very sacred, we cannot even trade or exchange it. We traditionally do not devastate we only maintain food production for our subsistence.”

One day, warns Tukano, the indigenous peoples will not be able to withstand political pressure from the Brazilian government that has agribusiness as their policy driven. “We want to build partnerships”, he adds.

Since the 90’s, the Tukano as a member of FOIRN joined the Climate Alliance based in Austria that has committed to reducing their greenhouse gas emissions. The aim among the European countries is to cut CO2 emissions by 10% every 5 years.

The important milestone of halving per capita emissions (baseline year 1990) should be achieved at the latest in 2030.

In the long-term, the alliance aims to cut 2.5 tonnes of CO2 equivalent emissions per capita and year by energy saving, energy efficiency and the use of renewable energy sources.

Government delegations around the world are starting to prepare their strategies for the COP20 meeting in Lima, Peru, to be held in December and are now looking for effective and low cost policies.

The RRI’s White recommends that all delegations should consider this as a matter of urgency.

This is a “low cost proven option as a priority to reduce emissions in their own countries”, he says.