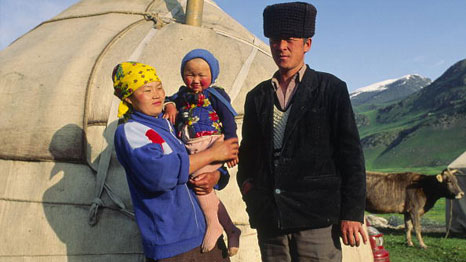 A Kyrgyz family in front of their yurt in the Tchonkymyn Valley in the Tien Shan Mountains. (Pic: UN Photo/F Charton)

A network of 25 indigenous communities from 10 countries has come together to share traditional knowledge on how to adapt to climate change.

Seed sharing between the groups will ensure that farmers grow crops that are resilient and diverse enough to withstand major damage in the face of unusual weather.

“We are from different communities but we have similar problems relating to climate change,” said Akylbek Kasymov, an economist at Kyrgyz National Agrarian University, and leader of the Kyrgyz delegation at a workshop for indigenous people in Bhutan.

The International Network of Mountain Indigenous People was created by communities from mountainous regions, speaking 22 languages between them, to swap ideas, information, and even seeds, so they can be resilient in the face of a changing climate.

These mountainous regions will face similar problems as the impacts of climate change become more severe, threatening the livelihoods and traditions of their indigenous communities.

These problems include melting glaciers, changes in rainfall patters, failing crops and more pests and diseases.

For instance, in Papua New Guinea, agriculture is the largest economic activity, and its natural climate means that most of its crops are fed by the rain.

At a recent meeting in Bhutan, Papuan farmers highlighted how changing rainfall patterns mean that the islanders have a growing need for irrigation to keep their crops alive. Local knowledge of this system is lacking. Through the network, indigenous communities will be able to help each other by sharing this kind of information.

According to the UN’s science report from the IPCC, indigenous knowledge can be a valuable asset in helping small farmers figure out how to adapt to climate change.  It also warns that the impacts of warming increase with altitude, putting mountainous communities at particular risk.

This means that these traditions need to be preserved as well as shared, says Kasymov, who says that some local indigenous knowledge was lost after the collapse of the Soviet Union, when large-scale immigration interrupted the transmission of information between old and young generations.

“Kyrgyz people, our parents, they somehow lived in harmony with nature,” he said. “Farmers and custodians of traditional knowledge, they have very rich experience even now.”

At the workshop in Bhutan, which took place last month, indigenous communities signed a Bhutan Declaration, calling on governments to support adaptation based on traditional knowledge, since “The survival of our knowledge systems is critical for the survival of humanity.”

The next meeting is scheduled to take place next year in Taiwan, around six months before the UN signs a global climate change treaty in Paris.