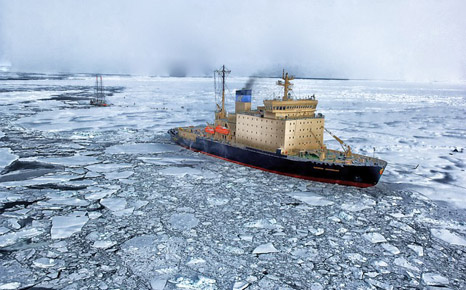 Controversial moves to drill for oil in the Arctic are to come under scrutiny from UK peers in a specially formed committee.

The Arctic is particularly vulnerable to global warming, with temperatures rising twice as fast as the rest of the world. Sea ice around the North Pole is shrinking rapidly, which opens up previously off-limits areas to mining and shipping.

Gazprom is already extracting Arctic oil and other major companies, including Shell, are set to follow. Green groups have campaigned vigorously against such exploration, raising local and global environmental concerns.

It will be a hot topic for the newly formed parliamentary Arctic Committee, led by Liberal Democrat peer Lord Robin Teverson.

The UK “needs to be involved” in the debate, said Lord Teverson. “We recognise that economic development and some drilling already takes place in these areas, but we have to look very carefully at what the environmental issues are around that.”

The committee will look at how the UK influences international bodies on the Arctic, as well as domestic policy.

Decisions on how to regulate development in the region are largely down to the Arctic Council. This group is made up of eight Arctic states, including Russia and the United States, and six organisations representing indigenous peoples. These members are “very individual in the way they look at things,” Lord Teverson said.

The UK is one of 12 observer members of the Council. It has recently been joined by China, India and Singapore, which will be affected by the opening up of new shipping routes.

These countries could stand to benefit from economic development of the area but are also exposed to environmental and financial risks.

Scientists have found links between a warming Arctic and extreme weather in the US and Europe. Meanwhile, Share Action and Greenpeace have warned investors in Arctic oil could be inflating a carbon bubble.

That is, if and when climate change policy results in tighter emissions limits, fossil fuel companies will not be able to sell their product and their assets will become worthless.

Committee members are also planning to visit the region, according to Lord Teverson, with Svalbard the most likely destination. Svalbard is an island in the Arctic circle with a Russian and Norwegian presence and several research centres.