A vital track of the UN climate talks in Bonn has collapsed after nations failed to resolve a dispute over the meeting’s agenda.

Eight days into the two week meeting, a proposed addition by Russia to the agenda of the session dealing with the UN’s decision-making process was not accepted.

A compromise deal presented to governments in the Subsidiary Body for Implementation (SBI) meeting this morning was rejected by Russia, Ukraine and Belarus.

It means sensitive discussions on climate compensation, adaptation and finance will now not be discussed within the process until the main summit in Warsaw this coming November. 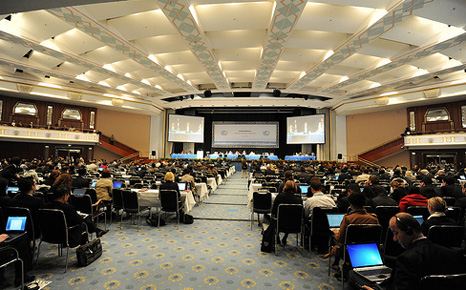 The SBI session of the UN climate talks in Bonn failed to agree an agenda (Source: Flickr/UNFCCC)

The issue stems from the Doha meeting last year when an extension to the Kyoto Protocol was pushed through despite concerns from those three countries. Russia now wants to reappraise the talks’ rules of procedure. In an interview with RTCC, Russia’s negotiator Oleg Shamanov said the process was “nonsense” if it ignored the rules.

Following a short break delegates returned to the hall to hear Russia compare the process to a “melting glacier” and a “haunted house”.

Governments have less than three years to agree a new universal climate treaty to replace the Kyoto Protocol, the world’s only binding climate agreement.

A sit became clear no compromise would be found, Chair of the SBI Tomasz Chruszczow reminded delegates that the UN’s climate change convention’s main objective was to reduce greenhouse gas emissions.

“This was agreed 20 years ago. We are no closer to this goal today. I won’t let this process jump from one obstacle to another. The Chair is in the service of the Parties, but it is up to the Parties to save the world,” he said.

The session will resume on Friday with the sole purpose of officially closing it.

UN climate chief Christiana Figueres said she hoped the experience would be remembered when they next met so that talks could progress and delegates could “improve the manner of their work”.

Russia, Ukraine and Belarus’ refusal to accept the compromise propose triggered a series of frustrated, angry and impassioned pleas for progress.

Singapore and India stressed that a similar situation at the Durban COP meeting was resolved by pressing ahead with the talks and settling the agenda later.

Fiji and Tuvalu, both acutely vulnerable to rising sea levels and keen for the swift adoption of an effective deal, called on the Chair to push through a resolution without consensus.

“We’re getting the impression these three countries are not interested in climate change,” the Tuvalu delegate said.

In an emotional intervention Fiji’s Sai Navoti urged Chruszczow to push through the agenda.

“Can’t the principle of necessity be urged? Don’t tie a noose around our neck because of a procedural issue that we are the master of,” he said.

Negotiations in other parts of the UN climate process, including the new 2015 treaty, have enjoyed a successful session in Bonn but are being overshadowed by the SBI stalemate.

“It’s important to stress that this is one element of a set of negotiations and the others have been going really well,” said Liz Gallagher, senior policy advisor with E3G who remains confident that a solution to the agenda dispute can be found in good time.

“It was a bit unexpected so it’s still unclear what happens next. I’m sure it will get resolved but it’s unclear how that could get done during this session. There might need to be cooling off period but it is still a long time till Warsaw.

“It’s the politics not the process that’s at fault here. They [Russia] are using the process to politicise their point,” added Gallagher.