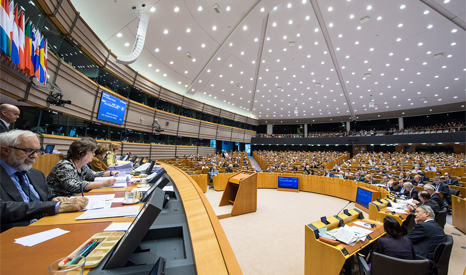 The EU will confirm today that it is on track to overachieve on its pre-2020 climate targets by 4.5%, which it hopes will provide an incentive for other countries to boost their own ambitions during a UN meeting taking place this week in Bonn.

The 28-state bloc, plus Iceland, is on track to cut its total greenhouse gas emissions 24.5% by 2020 compared to 1990 levels, saving an additional 5.5 gigatonnes of CO2 equivalent – equal to over one year of emissions within the EU.

Under the Kyoto Protocol, the EU agreed to reduce its emissions by 20%, but they say their success in implementing renewables and energy efficiency schemes has allowed them to overshoot this goal.

The announcement comes as ministers meet in Bonn, Germany, to discuss how countries can close the ’emissions gap’ between the amount of carbon dioxide that nations have committed to cut by 2020 so far and the amount they need to cut if the world is to avoid dangerous levels of climate change.

Despite the falling price of renewables, opportunities for efficiency and increasing efforts to impose a price on carbon, current policies mean that the world remains on track to exceed an internationally agreed limit of 2C.

Connie Hedegaard, the EU climate commissioner, said that it was “crucial” to increase efforts to combat climate change before 2020.

“The EU will substantially over-achieve its pre-2020 Kyoto Protocol emission targets,” she said. “This is thanks largely to over a decade of determined policy action by the EU and Member States.

“We are making a significant contribution to closing the ‘ambition gap’ between what the world needs to do and what countries intend to do by the end of the decade.”

She added that other major economies should now step up their ambition. The EU has offered to increase its own target to a 30% reduction if others indicate they are willing to undertake comparable action.

After 2020, the UN-brokered deal on climate change will come into effect. The nature and extent of this agreement is still under discussion. The EU has faced criticism that its 2030 target of a 40% reduction in greenhouse gases, which will form the basis of its contribution to this deal, is under-ambitious considering its current progress on its 2020 goals.

Negotiations on both pre- and post-2020 ambition will progress this week during meetings in Bonn.

Yannis Maniatis, Minister for Environment, Energy and Climate Change of Greece, which currently holds the presidency of the EU Council, said: “This meeting needs to make solid progress towards agreeing on the information that countries should provide when they propose their contribution towards reducing emissions under the post-2020 agreement.

“Agreement on such information is essential to ensure that contributions are transparent and can be fully understood. Bonn must also prepare the ground for a decision on ways to step up pre-2020 global emission reductions. The EU wants decisions taken on both of these issues at the Lima climate conference in December.”