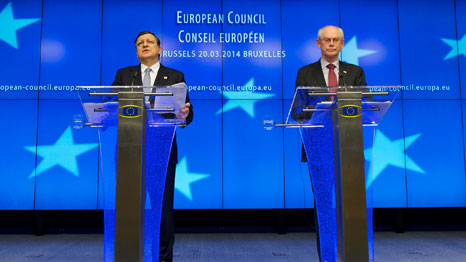 The European Council today concluded that they would agree on the main elements of an EU policy framework on climate change “no later than October 2014”.

The decision means that the EU is “not giving up its ambitions on climate change”, said European Council leader Herman van Rompuy, but activists have said that the delay is a big setback in the push for an ambitious international climate deal in 2015.

The next Council in June will “take stock” of the issues contained within the European Commission’s proposal, put forward in January, “with a view to taking a final decision on the new policy framework as quickly as possible and no later than October 2014,” according to the conclusions of the meeting.

Speaking today in Brussels, Commission President Barroso said that the “good discussions” within the Council supported the Commission proposal that Europe should strive to achieve a 40% cut in greenhouse gases by 2030.

“It is not yet an agreement on all the elements of the proposal the Commission made, but it is clearly an endorsement of the European Commission proposal as the basis for our policy of the future,” he said, adding that he felt “encouraged”.

Climate Commissioner Connie Hedegaard tweeted that the conclusions were “So far so good 🙂 We got the clear signal: #climate ambition level fully in line with 2050 objectives and final decisions by October”.

Her spokesperson Isaac Valero-Ladron said the EU Commission was still pushing for the early adoption of the targets. “The ball is now on the court of EU leaders,” he said.

Good #EUCO conclusions on climate. EU contribution will be ready in first quarter 2015 in line with what we agreed in Warsaw.

The result appears to be victory for Polish President Donald Tusk, whose country one of the EU’s highest CO2 polluters and is heavily reliant on coal for electricity, and a blow for the 13-strong Green Growth Group, which includes France, Germany and the UK.

Earlier this month they released a statement which urged the Council to agree on the core elements of a climate and energy framework for 2030 at this meeting.

“A delay risks undermining commercial sector confidence, deferring critical energy investments, increasing the cost of capital for these investments, and undermining momentum towards a global climate deal,” they said.

Speaking in a press conference, UK Prime Minister David Cameron said he wanted to see a “swift” EU resolution and confirmation of the proposed 40% GHG target.

“We want the EU to play a strong leadership role in efforts to secure a global climate deal next year in Paris,” he said.

Rumours that the EU could take decisive action to wean itself off Russian gas in the wake of the Crimea crisis appear unfounded.

Nick Mabey at the London-based thinktank E3G accused European Council President Herman Van Rompuy of “ignoring” the Green Growth group, but said the Ukraine crisis had ensured greater focus on where the bloc sources its energy.

“The unexpectedly strong “energy solidarity” clause to reduce gas import dependence will drive more investment in energy efficiency, EU grids and renewables,” he said. “This will increase security, be good for the climate and support future competitiveness.”

The outcome is a disappointment to those who were hoping for the EU to deliver a stronger message of ambition ahead of UN Secretary General Ban Ki-moon’s climate summit in September.

Pa Ousman Jarju, a Gambian diplomat who is an envoy for the Least Developed Countries bloc at UN talks, told RTCC the decision could affect the EU’s influence at international negotiations.

“If they had agreed on this, at least by the time of the UN Secretary General’s summit in September, that would have been a way of really motivating others to come on board,” he said.

“Not that they are dragging their feet, everyone will be relaxed, as they were leaders – and we hope they will continue to do that.”

Many hoped that early action from the EU would be able to set a benchmark for China and the US, which have agreed to start collaborating on what their own contributions to an international treaty might be from October.

Alden Meyer at the US-based Union of Concerned Scientists told RTCC the decision is unlikely to affect the White House’s decision making, which is focused on what China’s ambitions.

Climate discussions were ‘kick off’. Suggests EU will delay just long enough to render itself irrelevant in global talks. #EU2030

“Investors cannot plan complex, long-term investments on the basis of proposals alone. They need policies in place,” said Stephanie Pfeifer, chief executive of the IIGCC, which represents investors worth €7.5 trillion.

“New energy investment is crucial to securing Europe’s energy security and measures which deliver this investment should be a priority for EU policymakers.”

“This extra time could be a golden opportunity – for pro-renewables countries like Germany, Denmark and Portugal to rally round and start fighting for greater ambition for renewables and the energy security they bring,” he said.