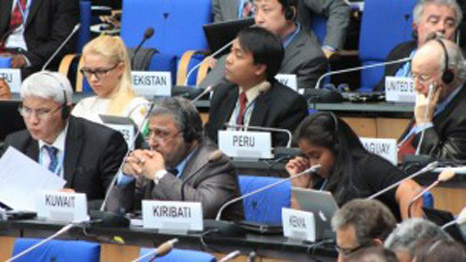 Around 400 lawmakers and scientists from around the world will meet in Mexico City this week to discuss how a global climate change deal could work.

Running parallel to UN talks in Bonn, the three day meeting is billed as a chance for legislators to test a ‘blueprint’ of the climate treaty that could be agreed in Paris next year.

“It is time to develop a new vision for an international climate agreement that harnesses the full power of legislators by placing national laws at its heart,” South African MP Cedric Frolick said in a statement.

“Such an agreement will strengthen national governance and empower the very actors that are the bridge from the people we represent to the international process.”

Delegates are expected to discuss how national commitments can be held to account in domestic laws, and set up formal parliamentary channels to assess the negotiating position of countries.

ANALYSIS: Why do this week’s UN talks in Bonn matter?

It could also see attending lawmakers commit to a review of whether existing legislation can limit global average temperature rise to 2C.

The meeting’s organisers GLOBE International produce an annual study of climate laws, which this year revealed 66 countries have 487 climate-related laws.

This week the US announced it would introduce new carbon cuts on power stations, while rumours from China suggest it could implement a carbon cap from 2016.

“Domestic legislation is critical because it is the linchpin between action on the ground and the international agreement,” UN climate chief Christiana Figueres said in a statement.