Why do next week’s UN climate talks in Bonn matter? 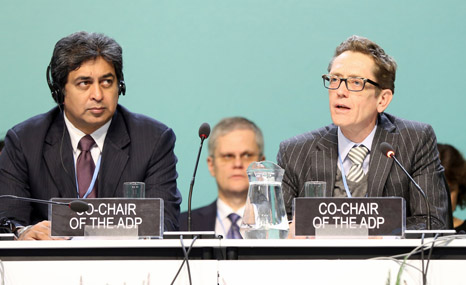 Kishan Kumarsingh and Artur Runge-Metzger are set to have a tough time chairing talks in Bonn (Pic: IISD)

Coming off the back of the Abu Dhabi Ascent, and the jubilation at the recently announced agreement in the Green Climate Fund (GCF) meeting, Bonn looks to be just another stage post en route to Paris in 2015.

But the Bonn intercessional this June is more than just a normal negotiation.  Ministers have no sooner disembarked from their transportation out of the luxury oasis of the desert, to step back in it to reach the not so glamorous Maritim Hotel, Bonn.

The unusual suspects at the intercessional are the result of strong calls by the most vulnerable countries for Ministerial engagement to focus on raising ambition from now until 2020.

What this means in practice is two Ministerials: one for those who already have existing commitments through the Kyoto Protocol to provide details on how they could increase ambition; and one for everyone to demonstrate what actions they are taking pre-2020.

It is unlikely that this short window of opportunity will result in new announcements to increase pledges before 2020.

After all, the Climate Summit hosted by Ban Ki-moon is where Heads of State will come with ‘bold’ pledges; they’re not going to let their subordinates steal their thunder by announcing in June.

But we shouldn’t write off Bonn because nothing major will be announced. The trials and tribulations of the GCF negotiations demonstrate that concerted diplomatic capability can produce results.  Multilateral agreements require reciprocity.

They depend upon relationships, friendships and partnerships. A fundamental condition of strategic diplomacy is to ‘know the other’.

Ministers need to spend more time with each other.  But with just 43 Ministerial representatives attending out of a possible 196, the opportunity for interaction is minimal.

Whilst it might seem to those on the outside like another talk shop, Ministers must make progress on key elements of the 2015 outcome.

First, they must develop progress on what an outcome on pre-2020 ambition could look like: who it should involve and how it relates to the current commitments.

Secondly, getting clarity on which countries will put forward post-2020 commitments and what those commitments should entail will be essential to securing success in Lima.

Thirdly, unravelling the elements of a financial outcome for Paris will be essential to building on the momentum of the discussions under the GCF.

And finally, Ministers will need to assess how to handle the currently undervalued elements of adaptation and climate risk inside the agreement.

The agreement to develop immediate measures to ratchet up ambition was a significant victory for the vulnerable countries that had fought hard to secure it in Durban.

These countries are crucial to championing a more ambitious climate agreement: without them the voice of ambition is diluted.

Ministers from across the major economies need to turn out in support of those who are facing an existential threat, show solidarity and send clear signals that, despite political obstacles, they take their plight seriously.

In parallel to the Bonn Ministerial, the World Legislators Summit will take place in Mexico.

Politicians from across the globe will congregate to examine and strengthen their collective resolve on climate change.  How contrasting to poor turn-out predicted in Bonn.