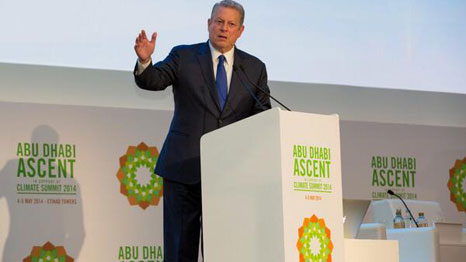 Calls for a global price on carbon intensified at a high level meeting in Abu Dhabi this week, with former US vice president Al Gore pinpointing it as his top priority in tackling climate change.

Asked what the one action he would like to see governments take in the fight to limit global warming, he said, “Put a price on carbon in markets and put a price on denial in politics,” to loud applause from the audience.

Gore was speaking at the Abu Dhabi Ascent, which took place on Sunday and Monday, where over 1,000 people, including 100 government ministers, had gathered for their first and only chance to prepare for the Climate to be hosted by UN Secretary General Ban Ki-moon in September.

His call for a carbon market was given substance by the World Bank, which issued a draft statement inviting governments and companies to “pledge to work together towards the long-term objective of a carbon price applied throughout the global economy”.

They should do this though strengthening existing carbon pricing policies, and exchanging expertise with a view to setting up new ones, said the statement, which the World Bank has said could be released in its final form at Ban Ki-moon’s Summit.

Unlike the UN’s ongoing climate negotiations, which see leaders tiptoe around possible contributions to a new climate treaty, the Summit is an opportunity for individual countries and businesses to declare “bold pledges” to tackle climate change.

“A carbon price provides a necessary signal for investment in low-carbon and resilient growth and, regardless of the mechanism used, should be part of any package of policies to scale up mitigation.”

Over 40 national and 20 subnational governments have adopted carbon pricing schemes, according to the World Bank, accounting for around 22% of global emissions. Others are still developing systems, which if brought into fruition could cover almost half of global CO2 emissions. Gore praised these efforts, including China’s experiments with a carbon trading scheme, as a case for “optimism”.

Regardless of these efforts, carbon pricing has suffered some serious setbacks over recent years, with Australia’s new Coalition government working to repeal the country’s existing carbon tax, and the EU working on reforms to its own beleaguered carbon trading scheme.

Sitting on the fence

Speaking at the end of the event, UN Secretary General Ban Ki-moon urged delegates to build political momentum in their own countries, ahead of his Summit and the UN’s annual conference in Peru later this year.

“Too many are sitting on the fence, waiting for others to lead,” said Ban, whose rhetoric on climate change has been strengthening, as the issue has risen to the top of his agenda.

He emphasised that actions should be built on “concrete deliverables”.

“I need you to build the new alliances that will move climate action from the marketplace of ideas to the commercial marketplace,” he said.

“Change is in the air. I challenge you to be part of that change – to be at the head of the race. Any government or major business that doesn’t have a climate strategy is in trouble.”

During the two days of talks, participants discussed topics such as energy efficiency, agriculture, cities and agriculture.

According to Helen Clark, head of the United Nations Development Programme, deforestation is one area where concrete pledges are expected to be delivered at the September Climate Summit.

She said that those who came to the meeting must now redouble their efforts to “finesse deliverables” that will contribute to a successful outcome in Paris 2015, where the UN hopes to sign off a climate treaty.

“The Abu Dhabi Ascent has brought many key actors from across sectors to look at concrete deliverables for the climate Summit,” she said.

“The path to the top is beginning to emerge from the mist. We can now see many steps which need to be taken individually and collectively to achieve a successful Climate Summit on 23 September.”