US solar power installed costs on course for 2020 target 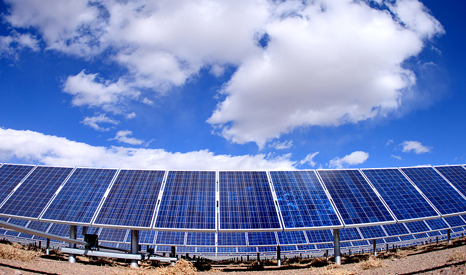 The installed cost of US solar power has fallen quarter by quarter for the past three years, putting them on course for an ambitious 2020 target, show the world’s most comprehensive cost data.

Installed costs fell 27% in the first three months of this year alone, compared with the corresponding quarter last year, shows an RTCC analysis.

The country is on track to achieve a very ambitious target, set by the previous administration under US President Barack Obama, to slash solar costs by the end of the decade, under a so-called “SunShot Initiative”.

Costs for all installations, regardless of size, averaged some $3.3 per watt installed this year to date, across 40 installations.

Unit costs were slightly lower for larger installations over 5 megawatts, the data showed, across a small dataset of just 20 installations.

The SunShot Initiative targeted an installed cost of about $1 per watt for utility-scale installations and $1.50 for residential units.

The solar data are gathered in a collaborative effort between government, industry, and the public, under a so-called “Open PV Project”, maintained by the US National Renewable Energy Laboratory (NREL).

“The database is continually analyzed for corrupt records, bad or invalid data, and outliers such as an abnormal cost to watt ratio. Records found to contain questionable data are flagged and are dealt with on a case by case basis by a member of the Open PV Team.”

The data correspond to large residential units, with an average size of 24 kilowatts, compared with an average roof-top installation of around 4 kW, and utility scale developments of 5,000 kW (5 megawatts) or more.

The data show continuing quarter on quarter cost reductions over the past nine quarters. 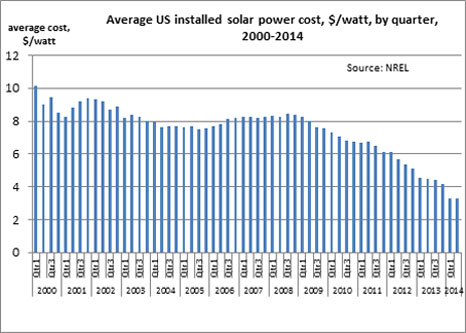 The aim was to drive faster cuts in solar power costs, and so make the renewable energy source cost competitive at large scale with other forms of energy without subsidies.

“This will increase American economic competitiveness and help the United States regain leadership in the global market for solar photovoltaics,” the US Department of Energy said three years ago, on the launch of the initiative.

The SunShot program was meant to build on the legacy of President Kennedy’s 1960s “moon shot” goal, which laid out a plan to regain the country’s lead in the space race and land a man on the moon.

The target of $1 a watt corresponded with around 6 cents per unit of electricity, broadly equivalent to the cost of generating power from burning fossil fuels.

The NREL cost data show that on the current trajectory, US solar power will achieve the 2020 target. However, that assumes continuing cost reductions which have recently benefited from a global glut in solar modules, as a result of Chinese over-capacity.

Further solar power cost cuts will have to reduce so-called soft costs, including labour and financing. 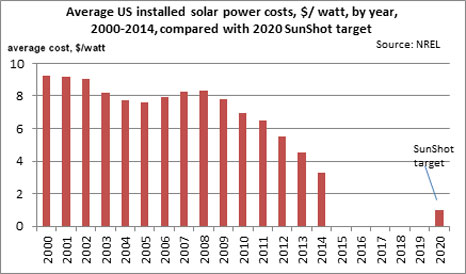 The NREL data show 240,433 records, providing the most comprehensive database worldwide of solar power costs. Not all the installation data provide cost details. After removing for these, there are some 215,407 records, which were used in this analysis.