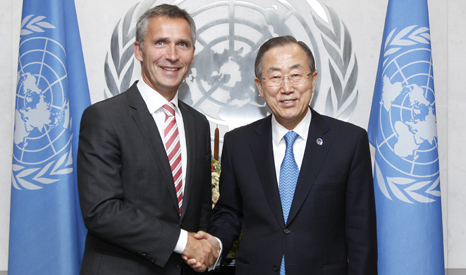 The EU’s March Council starts in Brussels on Thursday, with the economy, Ukraine crisis and the region’s energy plans up for discussion.

“It would be a great advantage for the efforts of Europe but also of the whole world to reduce the emissions and make progress, if the EU is able to agree before the [Ban Ki-moon] summit,” he says.

A European Commission white paper released in January recommended the EU accept a 40% emissions reduction goal for 2030, together with a 27% target for renewable energy and some form of efficiency standard.

Analysts say clarity from the EU over its ambitions could allow the USA and China the political space to deliver pledges towards a proposed global climate deal, set to be signed off in Paris next year.

The latest round of international talks to develop the 2015 agreement ended last week, with levels of trust between developed and developing countries at a new low.

One of the goals of Ban’s summit, to be held on the sidelines of the General Assembly in New York, is to try and resolve these differences at heads of state level, making it easier for negotiators at UN meetings to come to an agreement.

Stoltenberg’s role involves speaking to heads of government, business leaders and other decision makers in an effort to drive up political awareness in the next few months.

Based on his discussions so far, he says the will to address climate change does exist, but stresses the importance of working on small areas of convergence given the huge number of countries involved.

“I believe that’s why we should focus both on need for a global agreement but also on potential for moving forward on specific areas like forests,” he says.

“The key is the preparation, because this is a one-day summit, a meeting where we rally support and hopefully have some announcements or concrete actions in different areas.”

No official negotiations are planned for the New York gathering, with Stoltenberg describing the meeting as an opportunity for world leaders to commit to the concept of an emissions reduction deal.

But he says it’s vital that the summit ends with a common understanding from all participants that everyone has “common but differentiated” responsibilities to take action.

Arguments over who should take the lead in slashing greenhouse gas emissions have long raged between developed and developing nations, but Stoltenberg is clear the 2015 deal will involve everyone.

“There’s no way we can achieve the necessary cut in emissions without including all major emitters,” he says, stressing the importance of both selling the opportunities from green growth, and the dangers of ignoring the risks of global warming.

“It is important again and again to tell the world how dangerous that will be,” he says.

“But to some extent I feel we are passing the stage where it was necessary to explain that global warming is dangerous. There’s more and more understanding that to do nothing is not an alternative.”