US senators to hold marathon debate on climate change 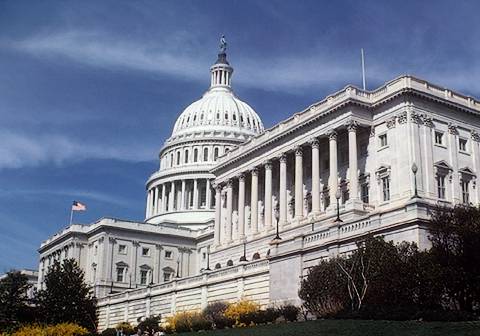 Democrats in the US Senate will mount an overnight “talkathon” to draw attention to climate change, using tactics often deployed by Republicans to block laws regulating fossil fuels and curbing carbon emissions.

The marathon debate will hear from at least 28 Democrat senators in the latest front of an escalating battle ahead of and midterm elections in November and plans by  President Obama to regulate coal-fired power stations.

Brian Schatz, a Democratic senator from Hawaii that is organising the Democrat initiative, said: “Climate change is real, it is caused by humans, and it is solvable.”

California Senator Barbara Boxer, who heads the recently-formed Senate Climate Action Task Force, said in a statement she wants to “wake up Congress” to the dangers of climate change.

Last Friday the Republican-controlled House of Representatives backed a bill that would remove much of the Environmental Protection Agency’s ability to regulate coal, but the proposed legislation is highly unlikely to pass a future vote in the Democrat-controlled Senate.

Monday I’ll be up all night w/ a group of Senators calling on Congress to act on climate. Add your voice to our debate by using #Up4Climate.

Many Republicans either deny that climate change is happening, is the result of manmade carbon emissions, or that US action curbing the the use of fossil fuels will solve the problem.

Republicans are also using the courts, lobbying, and public campaigns to fight what they see as Obama’s ‘War On Coal’, arguing the White House’s plans will cost tens of thousands of jobs and drive up energy prices.

Although the Democrat action isn’t a filibuster – a tactic that can slow down or prevent a vote on a particular proposal – the talkathon aims to remind Americans of the threat that climate change could pose, particularly rising sea levels, droughts and increasingly damaging storms.

White House spokesman Seth Larson said the overnight event is “just one of a number of steps that the Senate Climate Action Task Force will be taking this year, and we hope it will help get more Americans engaged in the important debate about how we can act on climate change.”

President Obama told Congress in his State of the Union Address earlier this year he would bypass hostile lawmakers by using the EPA, which is expected to publish detailed proposals on coal curbs in the summer.

Some Democrat senators from states strongly dependent on coal and oil – such as Louisiana and Virginia – are expected to stay away from tonight’s debate.

Democrats are also split on whether President Obama should agree to extend a US-Canadian oil pipeline, Keystone XL, that would enable crude oil produced from Alberta’s dirty tar sands to pumped down to Gulf Coast refineries and which green groups say would drive up CO2 emissions.

In the absence of a national law on carbon emissions, many states agreed to participate in carbon trading while major cities such as New York have carbon reduction targets and participate in a global network of mayors aimed at cutting greenhouse gases.

The US says it is on target to cut emissions 17% from 2005 levels, but poor countries want the world’s largest economy to promise much deeper cuts and commit tens of billions of dollars to help combat the impacts of climate change.