Why I locked myself to the White House fence in #XLDissent 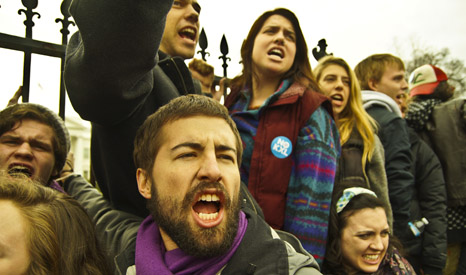 Nearly 400 protestors were arrested last weekend during a day of protest against Keystone (Pic: Collin Rees)

On March 2nd, I locked myself to the fence of the White House. I remained locked to the fence for more than six hours, until I was arrested as the 311th of 398 young people arrested that afternoon by the United States Park Police.

We came together to call on President Barack Obama to reject the dirty Keystone XL pipeline and show him we are willing to put our bodies on the line to protect our future and the future of the planet. The message delivered was that we are youth, we are powerful, and we care about climate justice.

The proposed Keystone XL pipeline would deliver toxic tar sands bitumen – a low-grade, high-sulfur crude oil that must be extensively refined to be turned into fuel – from the Albertan tar sands through the heart of the US and down to the American Gulf Coast, where that dirty oil would be refined and exported to other nations.

TransCanada, the company proposing the pipeline, has proven repeatedly that it cannot build a safe and secure pipeline — Keystone XL would inevitably leak, and it would be disastrous because tar sands are much more difficult to clean up than conventional oil.

Because the proposed pipeline crosses a national border, its approval falls directly to the US State Department and President Obama. The President has full authority to reject the Keystone XL pipeline and has stated he will do so if the project, “significantly exacerbates the problem of carbon pollution.”

His choice is clear, and it is time for President Obama to reject this pipeline. Keystone XL is a key to unlocking production of the Canadian tar sands, one of the world’s largest reservoirs of dirty fossil fuels.

Buried under pristine boreal forest in Alberta, the tar sands – if extracted and burnt – would destroy any hope for keeping global warming under two degrees Celsius, the upper limit agreed upon by the 15th Conference of the Parties to the UNFCCC in Copenhagen in 2009.

Moreover, this decision is about sending a message to the international community that the United States is serious about combating climate change and obtaining a strong, meaningful international agreement in Paris at COP 21.

With the U.S. Congress mired in dysfunction and hampering national climate legislation, this is a simple, powerful way for America to act on climate and draw a line in the sand.

By rejecting Keystone XL, the U.S. can be a global leader and come to the negotiating table with credibility and good will, rather than hypocrisy and inaction.

It is not exaggeration to say this decision is vital to the success of a 2015 agreement.

EU’s top climate official Connie Hedegaard said last year that rejecting Keystone XL “would be an extremely strong signal for the Obama administration […] If you had a U.S. administration that would avoid doing something that they could do, with the argument that in the time we are living in and with climate change we are faced with, we should not do everything we can do, then it would be a very, very interesting global signal.”

In other words, rejecting a fossil fuel infrastructure project because of its disastrous climate impacts would be a powerful signal.

On Sunday morning we assembled at Georgetown University, where President Obama announced his Climate Action Plan for the U.S. in a speech last summer.

From there more than 1,200 young people marched through the streets of DC to the White House, where we listened to powerful and impassioned speeches from First Nations representatives, tar sands activists from Michigan, and a former Obama campaign staffer who called on the President to live up to his promises.

“President Obama, we voted you in for change. Climate change isn’t what we were looking for,” said Hannah Bristol, the former staffer and current Middlebury College student.

Around 12:30pm, hundreds of us peacefully locked ourselves to the White House fence and created a mock oil spill in front of the fence.

The arrests began at 1:30pm and proceeded the rest of the afternoon and into the evening. For seven hours we sang songs, chanted, and discussed the world we want to see and the climate justice we desperately need.

When the freezing rain started we shared coats, huddled for warmth, and kept each other in good spirits. Rarely in my life have I felt so loved as when surrounded by my fellow arrestees on that fence.

Comment: do we want a future dominated by climate chaos?

The booking, arrest, and release process lasted fewer than two hours. I was charged with an infraction of blocking passage — the criminal equivalent of walking a dog without a leash — and paid a $50 fee before being released.

I spent less than five minutes in a jail cell. The officers acted with incredible poise and professionalism. I do not take it lightly that I am incredibly privileged to live in a country and be in a position to have myself voluntarily arrested, knowing I will be well-treated by the police and released immediately.

I recognize that privilege, and I want to do everything I can to use it for good.

XL Dissent was about showing that our generation cares about the choices made today, because they will affect us for the rest of our lives.

It was about coming together and acting on a level commensurate with the scale of the challenge before us, and about strengthening a community of amazing young climate warriors who will be fighting for climate justice and spreading messages of hope and love for years to come.

As Earthguardians Youth Director Xiuhtezcatl Martinez said during the rally, “They say we are too young to make a difference, but we are proving them wrong, right here, right now.

I think when the public sees college students coming out and getting arrested, people can say the youth came out. We were here. Because our generation will be the most impacted by whatever decision is made by the government.”

President Obama needs to make the right choice for America and for the planet, and reject the dirty Keystone XL pipeline.

We must commit to ending the fossil fuel industry’s grip on our society, and America must be an international leader in the fight against climate change. It can start right here.