State of the Union: Obama calls for climate urgency

President says he will use executive powers to curb use of coal, but defends domestic shale gas and oil industries 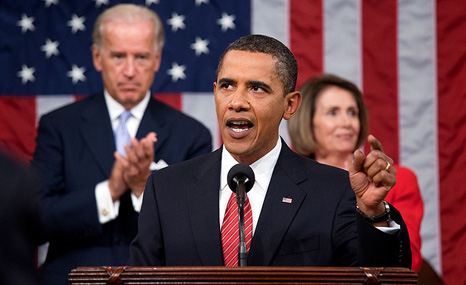 US President Obama’s State of the Union address last night vowed to bypass Congress and combat climate change by using his executive powers, but he defended the use of domestic oil and gas in the country’s ‘all-of-the-above’ energy strategy.

The annual speech, which was delivered to a sharply-divided Congress, sprung few surprises and highlighted existing plans by the Environmental Protection Agency to curb coal-fired power stations.

Last June, Obama directed the EPA to work closely with states, industry and others to draw up carbon pollution standards for both new and existing power plants.

“We have to act with more urgency—because a changing climate is already harming western communities struggling with drought, and coastal cities dealing with floods. That’s why I directed my administration to work with states, utilities, and others to set new standards on the amount of carbon pollution our power plants are allowed to dump into the air,” Obama said.

The president also took a fresh swipe at those who deny that carbon emissions from fossil fuels are altering the world’s climate.

“The debate is settled. Climate change is a fact.” —President Obama #SOTU #ScienceSaysSo

The speech also outlined that the US has reduced its total carbon emissions more than any other country in the past 8 years, although critics point out that emissions in the world’s second-largest emitter rose 2% last year, largely because of a shift back to coal because of rising natural gas prices.

Shale gas – the main reason why the US has been able to cut its emissions  – would remain a priority in the country’s energy mix but new safeguards would protect local communities from pollution and enable them to share more of the benefits of fracking, the president said.

Obama said his polices to promote shale gas and renewables had created new jobs and helped wean the country off costly imported energy.

“The all-of-the-above energy strategy I announced a few years ago is working, and today, America is closer to energy independence than we’ve been in decades,” he added.

Some commentators said the speech was notable more for what it didn’t mention on energy policy, rather than what it included.

Obama failed to mention carbon capture and storage, wind, nuclear or whether the White House would block a northern link to controversial the Keystone XL oil pipeline, which would bring oil from Canada’s emissions-intensive tar sands to Gulf Coast refineries.

But few had expected the president to run through the full gamut of  US energy and climate policies, given that the State of the Union address is usually a broad brush outline of the president’s priorities on domestic and foreign issues.

Some US environmental groups gave a general welcome to Obama’s speech, but urged the president to press ahead with delivering action to cut carbon emissions.

“Tonight, President Obama presented a vision of a nation built upon innovation and economic achievement. Moving toward a low-carbon, clean energy economy can be part of this vision. This is not only possible, it is imperative,” said the World Resources Institute in a statement.

Others expressed disappointment with Obama’s support for shale gas.

“If we are truly serious about fighting the climate crisis, we must look beyond an ‘all of the above’ energy policy and replace dirty fuels with clean energy,” said Michael Brune of the Sierra Club.

He added: “We can’t effectively act on climate and expand drilling and fracking for oil and gas at the same time.”

Coal industry lobbyists said the speech had failed to be honest with US voters about the damage that government regulations on coal-fired power plants would have on the country’s economy and jobs.

“Regulations spearheaded by the EPA will weaken our economy and energy security. We hope that the president hears the concerns of Americans who rely on affordable and reliable coal for electricity and uses common sense for standards that are achievable and make our energy cleaner,” said Mike Duncan, who heads the American Coalition for Clean Coal and Electricity.

Ahead of mid-term Congressional elections in November, senior Republicans are ratcheting up pressure on Democrats from coal-reliant states to oppose the president’s policies, while lobbyists for the fuel are using the courts to block the EPA from imposing tighter emissions standards.

“The President is planning to bypass Congress and do through regulations what he could not do through legislation. This is why I will be introducing a bill in the coming weeks that will require President Obama’s EPA to be held accountable for their rule making,” said Republican Senator James Inhofe in reponse to the Obama speech.